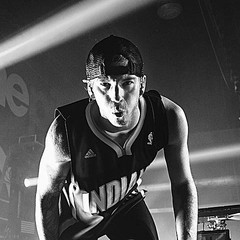 Joshua William “Josh” Dun is an American musician, and is currently the drummer for the band Twenty One Pilots. He was born in Columbus, Ohio, on June 18, 1988, along with two sisters (Ashley and Abigail) and a brother (Jordan), and taught himself how to play drums when he was young. According to Dun, he was not really allowed to listen to music as a child but would sneak down to the music store once a week and ask for suggestions from the people there. Dun worked at the Guitar Center for three years, also working with Twenty One Pilots’ former drummer Chris Salih.

Dun joined House of Heroes in March 2010, after the band’s former drummer, Colin Rigsby, took a break to spend more time with his family. He came in after being recommended by Rigsby himself.

Dun took part of House of Heroes’ live tour until October, when Rigsby subsequently returned to his duties. In 2011, Dun went to a Twenty One Pilots’ show upon invite by then-drummer Chris Salih, after listening to the band’s original demo CD. He was impressed with the trio’s performance. He eventually met the band’s lead singer, Tyler Joseph, after the show, and a couple of days later, began to spend time together and build a friendship. It was very important happening in Josh Dun biography, that was changed his life.

Later in the year, Nick Thomas and Salih sequentially left due to busy schedules, and Dun quit his job at Guitar Center to play in one show with Joseph. He played one song before the police officers eventually cancelled the show. After that day, Dun officially became the band’s full-time drummer. The duo then released the band’s second studio album, Regional at Best, on July 8, 2011, and signed with Atlantic Records subsidiary label Fueled by Ramen in April 2012.

Dun is Christian and was in a relationship with actress and singer Debby Ryan from May 2013 to September 2014. Dun has a tattoo of a tree on his right arm which represents what he believes. However, he prefers to tell people its full meaning in person and desires it does not go viral to the internet.