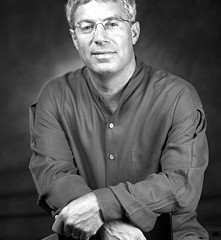 Virtuoso timpanist Jonathan Haas has raised the status of the timpani to that of a solo instrument throughout his unique career that has spanned more than twenty-five years.  From classical concertos to jazz and rock & roll, from symphonic masterpieces to the most experimental compositions of living composers, Haas has championed, commissioned, unearthed and celebrated music for his instrument, becoming, as Ovation magazine hailed him, "The Paganini of the timpani."

Demonstrating a remarkable versatility as a musician, Haas has performed and recorded with Emerson, Lake and Palmer, played on the Grammy Award-winning recording Zappa's Universe, recorded with Aerosmith, Michael Bolton, Black Sabbath, and explored heavy metal with his rock group Clozshave.

Haas' successful efforts to expand the timpani repertoire have led him to commission and premiere more than 25 works by composers in addition to Philip Glass such as Stephen Albert, Marius Constant, Irwin Bazelon, Eric Ewazen, Thomas Hamilton, Robert Hall Lewis, Jean Piche, Karlheinz Stockhausen, Andrew Thomas, and many others.

Haas' recordings -- in addition to the Glass timpani concerto -- include the trail-blazing 18th Century Concertos for Timpani and Orchestra and Johnny H. and the Prisoners of Swing, both on Sunset Records.  The latter was named for his jazz group and features innovative renderings of jazz compositions featuring "hot timpani" in front of a full jazz ensemble.  His rediscovery of Duke Ellington's brilliant composition for jazz timpani, "Tympaturbably Blue," is included on this recording, as are other jazz standards played on a set of ten kettledrums.

Ever the innovator, Haas attracted plaudits when he built the world's largest timpani, which is nearly 6' wide, nearly 4' tall, and 70 inches in diameter, almost twice the size of the world's second-largest timpani (a 48-incher used by Amsterdam's Concertgebouw Orchestra).  Haas discovered the kettle in an Aspen cow pasture.  It had originally been used to manufacture Swiss cheese at the turn of the century and, remarkably, matched the exact size specifications of a timpani.  Haas debuted a prototype of this unprecedented, incredible instrument at the 2003 Aspen Music Festival, and it made its official premiere at the Percussive Arts Society's annual convention later that year.

Haas also invented a process to improve the performance of crash cymbals that was developed into a new instrument called "The Master Series Anti-Lock Cymbal" produced by Zildjian, the largest manufacturer of cymbals in the world.

Haas is also on a mission to assemble a collection of the world's biggest and tallest percussion instruments, including a 300-year-old 9' tall drum from the Philippines and 400 other instruments.  It's an extraordinary, eclectic group that includes pieces that no Westerners have seen outside their countries of origin.

The rarest of modern virtuosi, Haas embarked on his career as a solo timpanist by performing the only solo timpani recital ever presented at Carnegie Recital Hall in 1980.  As an orchestral soloist, he made his debut with the New York Chamber Orchestra under Maxim Shostakovich and his European solo debut with the Bournemouth Sinfonietta.  He made his French debut performing Andrez Panufnick's Concerto for Percussion, Timpani and Orchestra with the Orchestra de la Garde Republicaine.  He was the soloist in the Druschetsky Concerto for Eight Timpani, Oboe and Orchestra with the Aspen Chamber Orchestra.  He has championed new music by presenting adventuresome programming such as The Music of Frank Zappa, showcasing the music of Edgar Varese and Frank Zappa, under the auspices of Lincoln Center's Great Performers Series.

A graduate of Washington University in St. Louis, Haas received his Master's Degree from the Juilliard School as a student of Saul Goodman.

An inspiring teacher, Haas is director of New York University's Department of Music and Performing Arts Professions' Percussion Studies Department, chair of the Juilliard Pre-College Percussion Department and a faculty artist at the Aspen Music Festival and School, where he has taught for the last 22 years.  Haas is the conductor and artistic director of the percussion ensemble programs at all three institutions and is the creator of one of the most innovative percussion intensives, hosting an NYU Broadway Percussion Seminar/Summit each year in June.  At NYU he introduced a first-of-its-kind program that includes in-depth theatrical percussion studies, the first modern-day Timpani Guild and an innovative classical percussion program.  He also established the first steel drum ensemble program at a major university/conservatory on the Eastern seaboard.  Haas was director of the Peabody Conservatory Percussion Department for 26 years, bringing it into international prominence.  He has presented master classes worldwide at the Toho Gauken, Hanoi Conservatory, Paris Conservatory, the Graz Percussion School, the Melbourne Conservatory, the Sydney Conservatory, Conservatory of Latvia, Zagreb Conservatory and many others.  Haas is frequently featured as a soloist and clinician at Percussive Arts Society International Conventions and writes extensively for educational journals including The Instrumentalist and Percussive Notes, the official journal of the Percussive Arts Society.

As active an entrepreneur as he is an artist, Haas heads Sunset Records, Kettles and Company, and Gemini Music Productions, which contracts musicians for Lincoln Center, New York Pops, and many other organizations.  He also works closely with percussion industry manufacturers Promark, Yamaha, Zildjian and Remo.  Jonathan Haas is a Yamaha Performing Artist.