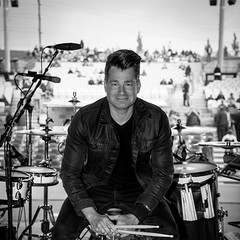 Johnny Rabb is an active live and studio drummer. He is the drummer for the platinum-selling rock band Collective Soul, and recently finished tour dates in South Africa. The band recently released Collective Soul - LIVE. The album is a collection of songs recorded on tour over the last year.

Johnny has been fortunate enough to develop a series of cymbals with the MEINL cymbal company. His Drumbals and Safari cymbals are part of the Generation-X line. He is also the founder of his own drumstick company. He continues to design and develop new sounds and innovations for his unique concepts on the drums.

As an author, Johnny continues his passion for education. He released The Official Freehand Technique Book/CD. Johnny was also voted #1 Best Educational Author by Modern Drummer’s Readers Poll for his book Jungle Drum ‘N’ Bass for the Acoustic Drum Set.

He has performed with a wide range of artists such as Tanya Tucker, Hank Williams III, Maynard Ferguson, DJ Hype, Alain Caron, Frank Gambale, Larry Tagg, SheDaisy, Deana Carter and Mindy McCready. He is also the co-founder of BioDiesel along with bassist, Clay Parnell. Together they comprise an electronic duo that performs live EDM.