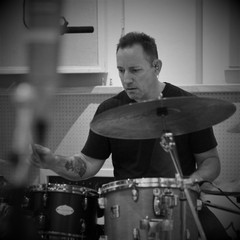 Jimmy Chamberlin has seen it all. As drummer for both Smashing Pumpkins and Zwan, there were few places he hadn't traveled, magazines he hadn't been in, and stadiums he hadn't filled. After being part of not one, but two great bands, Jimmy Chamberlin was ready to do something all for himself. Throughout his decade with the Pumpkins, thoughts of a solo career drifted in and out of Jimmy's daydreams. Although he may have occasionally mentioned the idea to his band mates, part of him never actually believed that those dreams would turn to reality—at least not as quickly as his solo bow has evolved from casual conversation to finished product. Through 10 long days in the summer of 2004, he morphed his dream into 11 cinematic, sometimes dark and jaggededged songs composing Life Begins Again, the debut effort from Jimmy Chamberlin Complex.