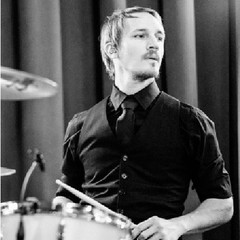 Jeff Friedl is a unique and powerful drummer who since moving to Los Angeles in 2004, has lent his impressive skills to a distinct list of artists including A Perfect Circle, DEVO, Puscifer, CSS, and ASHES dIVIDE. Although he is now a prominent musical fixture in the world of modern rock, Jeff built his career being influenced by and playing many different styles of music including Jazz, Blues, R&B, Folk, Salsa, Rock, and Metal.