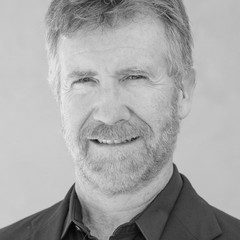 Dr. J. B. Smith is Emeritus Professor of Music and the former Coordinator of Percussion Studies in the School of Music at Arizona State University who currently resides in Melbourne, Australia. He is internationally recognized as a performer, composer, educator and conductor.

He was director of the ASU Contemporary Percussion Ensemble that was featured in performances at the 1991, 2002 ad 2006 Percussive Arts Society International Conventions. As a member of the Desert's Edge Clarinet-Percussion Duo with Dr. Robert Spring, Dr. Smith performed at the Music Educator's National Conference in 1994 and the 1992, 1995, 2002, 2004 and 2013 Clarinet Fest International Conferences. The duo has given concerts throughout North America, Europe and Asia. He served as principal percussionist with Ensemble 21, a contemporary music group under the direction of Arthur Weisberg, and as principal percussionist with The Daniel Lentz Group which performed at the Interlink Festival in Los Angeles, the Bang on a Can Festival in New York and the Festival Musica Visual in Lanzarote, Canary Islands. He has also recorded and performed with the internationally acclaimed Summit Brass and The Phoenix Symphony. He has recorded for Koch, Summit, Centaur, Rhizome Sketch, Fontec, Leo, Canyon Records, Potenza and Whole>Sum Productions. His CDs Apparitions for Percussion, First Reflections and At the Desert's Edge are available from jbmithmusic.com. Percussion Solo 2011 and LIVE Chamber Music with Percussion are available from TresonaMultimedia.com.

A music educator for over 30 years, Dr. Smith integrated innovative methods and technology into his teaching. In pursuit of techniques to improve his students’ sight-reading and rhythm skills he developed two computer-based systems: Flash Tracker and Solo Duets. Flash Tracker uses a flashcard approach to encourage musicians to quickly recognize notated music. The computer program displays the music, listens to musicians’ interpretations and analyzes their performances. Performers are graded on note accuracy and rhythmic precision. Solo Duets consists of a series of two part exercises. Musicians record both parts using readily available multi-track recording software to evaluate rhythmic accuracy. Both programs are available from jbsmithmusic.com.

Dr. Smith is active as a composer, with numerous works published by C. Alan Publications and J. B. Smith Music.