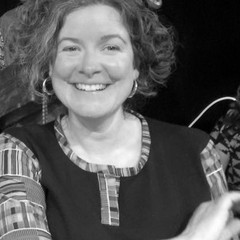 Dr. Jane Bentley has been a drum circle facilitator since 1999, after first encountering the work of Arthur Hull, and trained extensively with him ever since, becoming a Village Music Circles certified facilitator. In 2011 she was awarded her PhD based on drum circles and improvisation, highlighting the effects of group music making on human wellbeing - the first time that the practice of drum circle facilitation has been studied at this level.

Her practical work as a facilitator has broken new ground in the field of health and wellbeing, through her long-term collaborations with mental health occupational therapy staff in the UK National Health Service. In 2007, she established ‘The Buddy Beat’ drumming group, which won the Epic award for the best voluntary arts project in Scotland, and inspired the formation of several other drumming groups for mental wellbeing.

She presents at both national and international conferences on the subject of drum circle facilitation, and the potential of music making for social development. As a trainer, she has been delighted to collaborate with two of Scotland’s best known orchestras – the Royal Scottish National Orchestra, and the Scottish Chamber Orchestra, to develop and extend their work with children and adults in hospitals across Scotland. She has been involved in training musicians, music therapists, occupational therapists, nursing staff and activity co-ordinators from Brighton to Chicago.