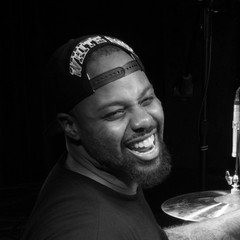 Jamal Moore hits hard. On any given Sunday, or any random Thursday — sneak behind Moore’s drum shield to check his kit for newly-cracked cymbals, thrashed drumsticks or worn-out pads. “The music makes me do it,”he’ll tell you with a sly smile. Raised in Maryland, close to Washington, D.C., Moore is a preacher’s kid. The church served as the birthplace of his musical talent, and at the tender age of seven, he answered his calling. By the time Moore turned 18, he had graduated from his hometown church to the national gospel music stage with recording artist Byron Cage. Since that first major gig, Moore has played with gospel mainstays including Bebe Winans, Gerald Scott, Isaiah D. Thomas and Tyrone Powell, among many others. Far more complex than haphazardly-placed chops and fills, Moore is a musically interpretive and thoughtful drummer whose talent reaches far past the drum kit. A diverse musician, Moore can read music or play by ear, and has drawn upon his experience and aptitude to serve as band leader and/or Music Director on many occasions. In addition to his work as a live musician, he enjoys producing, writing, and programming drum parts. In 2008-2009, Moore joined the Backstreet Boys “Unbreakable” World Tour with his brother and mentor Aaron Spears, visiting North America, South America, and Europe. The experience on that incredible international stage served as Moore’s transition into contemporary music. In 2010, Moore enjoyed working on multiple high-profile gigs for artists including Keri Hilson, Diddy Dirty Money, T.I., and Kelly Rowland. He appeared with those artists in live venues and on televised appearances that reached audiences across the globe. Currently with the reputation as being amongst the very small handful of premier young drummers in the industry, Moore looks ever-forward to challenges, both musical and mental. Buoyed by loyal support from top names within the fiercely competitive percussion community, Moore values his position amid the very best. When asked how it feels to be admired by so many of his fellow drummers, Moore replies with a maturity far greater than other young men of his age: “I know where my gift comes from, and every time someone gives me a compliment I give God the glory.” In 2011, Moore hit the road with breakout pop artists Greyson Chance and Cody Simpson, as well as international pop sensation Natasha Bedingfield. Additionally, he played dates with superstar Usher, including the Essence Music Festival — one of the largest live concert event weekends in the United States. All throughout 2012, Jamal continued his career by playing gigs with Cee Lo Green and Natasha Bedingfield. While closing the year out, Moore released his Christmas EP titled “FOI” with fellow D-M-V area musician Darryl Woodson.