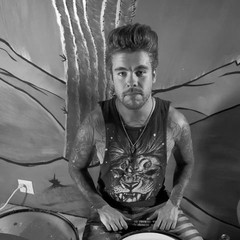 Florida-based artist Jake Garland is drummer for the band Memphis May Fire, drummer/song-writer in Broadway, and engineer at Chango Studios.

Jake started playing drums in sixth grade, when he joined the middle-school band class. When he was 13, in 8th grade, Jake won a county Jazz Band Award for his drum solo in the song Sing, Sing, Sing.

Jake Garland played drumset and percussion throughout middle school, and he continued into high school while also marching snare drum for three years. Jake then went to the University of Central Florida for a year for a bachelor of arts in music degree, also marching snare in the band there. Says Jake: "A lot of my influence definitely comes from my marching experience, and that has helped my technique on the set. The first few drummers that really got me into in the rock/metal scene were Alex Rodriquez from Saosin and Aaron Gillespie from Underoath."

In 2010 Jake joined the band Memphis May Fire.