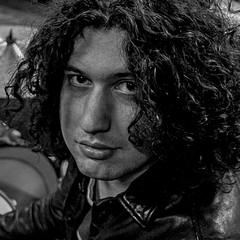 Ilan Rubin has been playing drums in bands for the last 12 years. No big deal right? Well, it's impressive if you consider that Ilan Rubin is 21. Currently drummer for Nine Inch Nails, Ilan has been has been touring and recording since the age of 9. He started his musical career playing drums for San Diego band F.o.N. putting Ilan on the road, in the recording studio, and eventually on several Warped Tour stints. A trip to Rome, New York with F.o.N. landed him in the Guinness Book of World Records as the Youngest Musician (age 11) to ever play Woodstock. One year later, at the age of 12, Ilan was voted "Best Undiscovered Drummer" in the World in the "18 and under" category by Modern Drummer Magazine and was flown to New Jersey to perform at the prestigious Modern Drummer Festival. The "over 18" winner was flown in from Argentina, hence the title "Best in the World".

Since then, Ilan has been featured in RHYTHM, Modern Drummer, DRUM!, DRUMMER, NME, Kerrang!, and Alternative Press magazines. In 2002, Ilan joined Denver Harbor, which featured members of FenixTX (MCA/Drive Thru Records) and gained even more notoriety for his powerful and tricky yet tasteful drumming on their major label debut "Scenic". From late 2005 to early 2006, Ilan filled in with FenixTX for a couple U.S. tours and a Japanese tour.

Ilan then went on to play drums for welsh-rockers Lostprophets. Jamie Oliver of Lostprophets recently said in an interview with Kerrang! that Ilan was like “John Bonham playing punk rock”. Ilan played a few tracks on their latest #1 release "Liberation Transmission" and played drums on Lostprophets’ 4th studio album “The Betrayed” out January 2010. Ilan toured the world with Lostprophets including headlining slots at Reading/Leeds ‘07, Download Festival ’08, Fuji Rock ’07, and a sold out arena tour in the UK.

In late 2008, Trent Reznor invited Ilan to join Nine Inch Nails mentioning that Ilan had “blown him away” after watching him at Reading/Leeds Festival in 2007. Rubin then blew the rest of the band away in November when he was asked to rehearse with Nine Inch Nails on their “Lights In The Sky” tour following Josh Freese’s departure. Ilan has been touring all over the world with Nine Inch Nails.

On his down time, Ilan has a solo project called The New Regime where he plays, sings, and writes everything. No mere time keeper, Ilan is just as proficient with a piano, guitar, or bass as he is with drums. Ilan also does session drumming and has worked with producers Bob Rock, John Feldmann, Mark Trombino, and Joe Marlett.