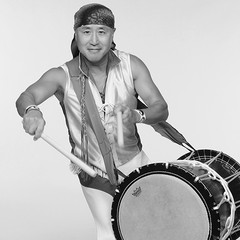 Hiro Hayashida began his drumming career at age 14 with the drum set, and later joined the internationally-renowned Taiko drum group, KODO, which toured for seven years.

As a soloist, Hiro Hayashida was invited to play at various international events such as the WTO Show in Singapore, Japan Week ‘97 in the Netherlands, Expo 2000 in Hanover, the closing ceremony of the FIFA World Cup in France, and the 50th Anniversary Concert of Doudou N’Diaye (the Rose UNESCO’s World Heritage, and a leading African percussionist in Senegal).

In 2004, Hayashida performed alongside his professional drum ensemble, ZI-PANG, at the Japanese Academy Award Ceremony. He made is U.S. debut in 2008, with his performance in Coldplay’s “Princess Of China” music video, featuring Rihanna.

Hiro Hayashida is regarded as a leader in the drumming art form of the Katsugi Okedaiko, a unique shouldering Taiko. As a solo Taiko drummer, composer, and producer, Hayashida is the quintessential Taiko drummer who continues to influence the Taiko world and community by performing superior concerts, and teaching his unique style.

Hiro Hayshida has worked closely with Remo, Inc., assisting with improvements to the Taiko drums, specifically, the Katsugi Okedaiko. The Katsugi Okedaiko is made with Remo’s patented Acousticon® drum shell and Skyndeep® drumhead technology film, creating traditional sounds, even in extreme weather conditions.