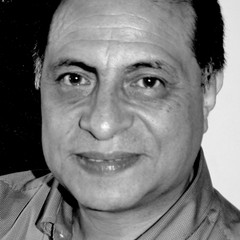 Born and raised in Lima, Peru, Hector comes from a well-known family of musicians. His grandfather, Fernando Neciosup, and his dad, Moises Neciosup Acuña, were both distinguished music teachers in Peru. But the person that inspired him the most was his uncle, Alejandro Neciosup Acuña (Alex Acuña) world renowned percussionist. Hector was introduced to percussion instruments from a very early age and by age seven he had mastered the basic beats for those instruments. At age fifteen, Hector was accepted at the Conservatory of Music in Lima Peru. At age eighteen, he moved to the United States and participated in a drum contest directed by the legendary Louis Bellson, in which he won first place. Consequently, Hector was granted a full scholarship to study at the University of Miami, where he major in Studio Music and Jazz. During that period he was part of the faculty as Latin Percussion Instructor for Miami Institute of Percussion, which was founded by Russ Miller. He was also the president and drum instructor for the Elohim School of Music.

Hector finished his Bachelor’s and Master’s in Music Performance and Education at Florida International University and is currently enrolled at Knox Theological Seminary pursuing a Masters of Arts in Biblical and Theological Studies.

As musical director, Hector has a great reputation, not only among major artists but also in churches. For the past 10 years, Hector has been the musical director at "Weston Baptist Church" and a music and chorus teacher for the "Weston Christian Academy." Prior to Weston Baptist, Hector was the musical director for several churches and bands around the Miami, Broward, and West Palm Beach area. In addition, Hector was on faculty at Florida International University for 13 years and is on faculty at Broward College. Presently, Hector is one of the most sought after music teachers, music directors and performers in Miami, Broward, and West Palm Beach, FL. Hector proudly endorses Pearl Drums/Percussion, Paiste cymbals, Audix microphones, Innovative drumsticks, Beato Bags, and Remo drumheads.

Hector is currently recording instructional videos that will be posted online.