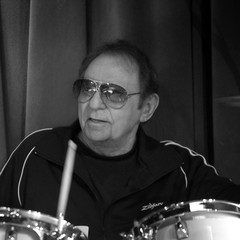 Hal Blaine may well be the most prolific drummer in rock and roll history. He's certainly played on more hit records than any drummer in the rock era, including 40 #1 singles and 150 that made the Top Ten. Eight of the records he played on won Grammys for Record of the Year. Blaine, who was born Harold Simon Belsky in 1929, became a professional drummer in 1948 and joined teen idol Tommy Sands' band in the late Fifties. He was the most in-demand session drummer in Los Angeles during the Sixties and early Seventies, and a list of musicians he played with reads like a who's who of popular music. In 1961, Blaine drummed on "Can't Help Falling in Love With You," one of Elvis Presley's most memorable sides, and he would play on Presley's film soundtracks throughout the Sixties. However, Blaine's best-known affiliation is with producer Phil Spector, where he served as the percussive backbone of the "Wrecking Crew" the nickname that younger studio hands on the L.A. scene bestowed on themselves after the rock-hating old-timers complained they were "wrecking the business." He was a key component of Spector's "Wall of Sound" production, which yielded such classic rock and roll hits as "Be My Baby," by the Ronettes, and "Da Doo Ron Ron," by the Crystals. Blaine also established a fruitful relationship with Beach Boys leader Brian Wilson, for whom he served as the first-call session drummer. Blaine appeared on innumerable Beach Boys hits, ranging from "Surfer Girl" to "Good Vibrations." He also drummed on countless recordings by the cream of West Coast pop musicians, including Jan and Dean, the Mamas and the Papas, the Byrds, Johnny Rivers, the Association, Sonny and Cher, the Grass Roots, and Gary Lewis and the Playboys. On the more "adult" side of the pop ledger, Blaine played drums on recordings by Frank Sinatra and Herb Alpert and the Tijuana Brass. By Blaine's own estimate, he performed on 35,000 recorded tracks over in a quarter century's worth of work. He published his memoirs, Hal Blaine and the Wrecking Crew, in 1990. In March of 2000 Hal Blaine was inducted into the 'Rock and Roll' Hall of Fame.