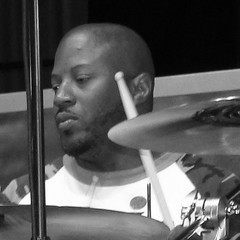 As long as Gorden Campbell remembers, he's been playing drums. Born in New Haven, Conn. and raised in Newburgh, New York, Gorden began playing drums at the age of 5 in his grandfather's church. He started taking formal lessons in elementary school and continued thru college (Howard University) earning a bachelor's degree in music with a major in Jazz studies. During those informative years, Gorden was able to perform in various marching bands, gospel choirs, orchestras, percussion ensembles and jazz ensembles while still playing in church where he also started playing the organ.

In 1993, Gorden went on his first worldwide tour with a group called Shai. In 1994, Gorden moved to Los Angeles. Since the move to L.A., Gorden has been blessed to have worked with some of the entertainment industry's top artist and entertainers. He has worked with a wide variety of artists including Earth, Wind & Fire, George Duke, Herbie Hancock, Stanley Clark, Mary J. Blige & Jessica Simpson to name a few. He is currently the musical director for Def Jam artist Ne-Yo. Gorden recently worked on the smash hit movie "Dreamgirls" soundtrack. He can also be heard on such movies as, "Be Cool" and "Love Chronicles." When Gorden is not touring he does various sessions, T.V. shows and he also produces everything from jazz to hip-hop to gospel.