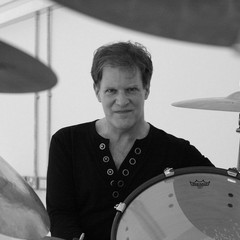 Gary Husband is one of a rare breed of musicians in that his expression is divided equally in his capacity as a drummer and a pianist/keyboardist of international repute. His classical roots, his quest and development in the improvisational, jazz and jazz/fusion areas - not to mention his tenure in the pop, rock, funk and blues circuits - are all evident inside Gary's distinct and far-reaching musical personality. His own solo recording output over the last several years have also reinforced his status as a critically acclaimed writer and arranger in the contemporary music world.

His partnership with guitar great Allan Holdsworth (which initiated in 1979) signaled a musical relationship between the two that carries on through to this day. Husband has worked with guitar great John McLaughlin since 2004 and has been the keyboardist & second drummer in McLaughlin's 4th Dimension group since 2007. From the early 90’s he has also toured and recorded with drummer Billy Cobham, most recently as a member of Cobham’s Spectrum 40 band (along with guitarist Dean Brown & bassist Ric Fierabracci.) He released his first solo album (Diary Of A Plastic Box) in 1998 and from 1999 to 2002 he led his Gary Husband New Trio, recording two albums with the group. In the summer of 2003 Gary was awarded a highly coveted place on the Arts Council of England's Contemporary Music Network touring scheme to lead a hand-picked ensemble of world-class U.S. musicians for a concert tour across the UK in March 2004. This project, entitled Gary Husband's Force Majeure, featuring Randy Brecker, Matthew Garrison, Jim Beard, Elliot Mason, Jerry Goodman and Arto Tuncboyaciyan was so successful that it returned to the UK in March 2005 for a further series of concerts. Among his several ambitious solo piano recordings is the highly-acclaimed The Things I See - Interpretations Of The Music Of Allan Holdsworth – an innovative and passionate portrayal of some of the guitarist's most famous music. His later jazz quartet of 2009 (Gary Husband's Drive) released the celebrated album Hotwired. His typically diverse range of associations and credits with others – on either or both of his instruments - include (or have included) tours and recording with Lenny White & Friends, (along with with Bennie Maupin, Foley & others), Jack Bruce, Mike Stern, Robin Trower, Christof Lauer Trio, Jack DeJohnette, Dewa Budjana, Germany’s NDR and HR Big Bands, Sweden’s Norrbotten Big Band and others. As a session musician and/or touring sideman he has performed/recorded with Jeff Beck, jazz/funk/pop band Level 42, UK, Gary Moore, Nguyên Lê, Al Jarreau, Maria Schneider, Quincy Jones, Olga Konkova, Aydin Esen, Andy Summers, Bill Evans, Christian McBride, Joe Lovano, Peter Erskine, Dennis Chambers, Michael Gibbs, Vinnie Colaiuta, and many others.

Gary continues to devote a substantial portion of his time to educational programs and is an internationally acclaimed drum clinician.

Gary is one of those unique musicians that can play two instruments on a very high level of virtuosity. To have a talent like Gary in the band is like having an extra musician... He constantly amazes me.

Gary's pretty much of an improvisational genius to me... and he's always been special to me because the way he plays the drums within my music is about as close as you can get to the way I hear it.

Gary is such a great drummer, and an equally great pianist!!

“A voice all his own. Hellfire, when are people going to talk of ‘Husband-esque’ piano?”

"A recording that is full of surprises. But Gary is no ordinary musician: full of invention and surprises, modulations and inversions of melodic, harmonic and rhythmic content abound. This is Gary Husband in full bloom: Wonderful!"

"Gary is one of my all time favourite drummers. You don't need to tell him a lot, he just knows what to do. And that's my kind of drummer."

"Gary's pretty much of an improvisational genius. He's always been special to me because the way he plays the drums within my music is about as close as you can get to the way I hear it."

"Who plays with more passion, heart and heat? Nobody!"

"You should hear the tunes Gary writes, plus the way he plays. The guy's a genius... Gary's a three-dimensional man."