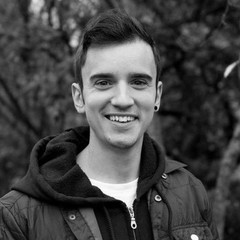 Frank Morda is an Australian musician based in Melbourne, most known for his drumming in the bands Ceres and Self Talk.

Frank was fascinated by drumming from an early age, banging on pots and pans with wooden spoons before he was introduced to a real kit by his cousin. He began officially drumming at the age of 12, starting lessons in his first year of high school.

During his formative years, Frank was influenced by a lot of rock and punk drumming, finding inspiration in both local and international bands, such as Blink 182, The Living End and Motor Ace. Over the years he has written and toured with his own bands, as well as doing session work for various artists and also teaching drums in schools.

He has won various awards with his bands, including Best Live Act in Victoria at the National Live Music Awards, and been nominated for the Australian Music Prize.

"I have used Remo Drumheads for many years - since the day I began to understand and appreciate the qualities and differences a good drumhead makes.  I have always been able to find a Remo Drumhead that sits perfectly and enhances the sound of my drum, no matter what size, make, etc..  Remo has traditional values but a modern application."  -Frank Morda