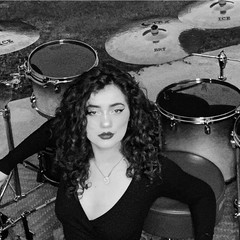 Faith Benson is an American drummer and songwriter born on the beautiful island of Oahu, Hawaii. Her passion for music started when she began playing drums at the age of twelve. Since then, Faith has honed her drumming and production skills, establishing herself as a well-rounded, professional musician both live and in the studio.

In 2012, Faith formed the band Crimson Apple with her three sisters. Working with the band, Faith has created a signature sound by blending live rock drumming with electronic trap elements. Crimson Apple has toured all across America, opening for artists such as All Time Low and The Chainsmokers. The band has amassed a significant following on social media platforms, most notably on TikTok, where they have gained over a million followers, and their series, “#catchthisbeat”, has caught the eye of more than twenty million viewers.

Outside of her endeavors with Crimson Apple, Faith has also garnered success on her individual TikTok, Instagram, and Youtube channel, on which she can be seen playing drums in a multitude of genres under the handle FaithNdrums. Bringing her drumming to an online medium has not only propelled her career forward but has also earned her the coveted title of “2017’s Hit Like A Girl Champion”, the opportunity to play drums for the Plain White T’s and Bea Miller, and an appearance on the CW television series, All American.

Faith is an active member of the female drum community. Since winning the Hit Like A Girl contest, she has been a reoccurring member of the jury panel and an inspiration to female musicians worldwide.