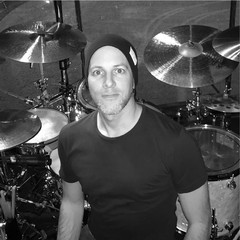 Eric Boudreault was born in a small town called Alma in Canada. Growing up as an only child, he was taught how important values such as work, perseverance and determination are. If you want something you have to work it Eric first discovered the drums when he was only three years old. He became curious of music at an early age. He received his first drum kit at the age of five and joined a band at ten. His positive energy and attitude paid off really young. It gave him the strength to knock at the doors of drum companies and music bands. The drums were more significant for him than just a back beat instrument. Boudreault was already creating new organic & original beats.

In 1999, his first real chance of proving himself came up when he was selected to be part of the Yamaha Rising stars showcase at the Montreal Drum Fest. His talent was starting to be noticed by other drummers and by the music industry.

After gratuated from the college of Alma, and from the Concordia University in Montreal, the real word was opened for him. He has become one of the most busiest international touring Canadian drummer...with 15 years on the road and more than 4000 shows with differents projetcs.

He quickly Joined the tour Cavalia, an equestrian show. Brilliant music composed by Michel Cusson, the show performed across the USA and Canada for years. Eric ended his contract after three years of travelling and more than 700 shows. Eric is currently on tour with Odysseo , the second production from Cavalia with more than 1200 shows in is pocket.

Despite the wild music industry and unpredictable salary, he managed to stay quiet and focused on his work. Concerned with his credibility on the market, he called drum companies for support and endorsement. He became one of the rare Quebec, Canadian drummers to be endorsed by Evans drum heads, Paiste cymbals , Vater drumsticks and DW drums (Drum Workshop).

In 2006, Inizio, first album of his jazz band Waza was released in stores. Featuring Alex Acuna, John Patitucci, John Beasley, Michel Donato and Ronal Di Lauro, the album is a blend of new & complex drum patterns. Waza was also invited to perform at the Montreal Jazz Fest in 2008 and at the NAMM Show in California in 2011.

Eric Boudreault has continued to give much of his time on different projects. In the previous years, the busy bee has been giving master classes across Canada, produced albums, More recently he was invited in Los Angeles for the Drum Channel Experience. SInce then he is part of the Internet Drum Channel Teacher going ther once an a while. He also be one of the main features of the 20th Montreal Drum Fest Anniversary. Eric played on many different Major Tv shows like : Jay Leno, KTLA Morning, E-talk,Today NBC news, FOX5 morning show Los Angeles, FOX San Diego, KGW Portland, Star king (South Korea), Dans l’univers..., Montreal-Quebec, Salut Bonjour, Musimax, Musique plus & Much music, L.A. Morning, CityTv Toronto, CHCH tv and many others, just for name it a few...

Eric started to work with the rock & roll circus Les Parfaits Inconnus in 2007 with more than 300 shows all around the world. In 2008, he joined the biggest percussions school in Canada Samajam with more than 400 shows and team building.

Since November 2012, you can get Eric’s drum book, DRUMMING LANGUAGE. He is very proud of that accomplishment. The book was a long process and hard work.He like to be part of the drummer community so that’s why he was the Spokesperson / Host and artistic director for the Quebec city (Province of Quebec, Canada, Drum festival), “Capitale Drumfest”, produced “by La Boite à Musiciens” editions 2014 & 2015. This opportunity have been an amazing contribution for the wolrd drumming communities and Canadian drummers community. On the side of is drumming career, In january 2017 until now, Eric became the head of the musicians casting departement at Samajam Production.

Eric Boudreault is already part of the encyclopedia of the Best drummers in the world, the Stick and Skins. His success is not only the destiny, but the result of his self-titled effort and talent as a musician. He is an inspiration for his generation and I truly invite you to do the same with your dreams.