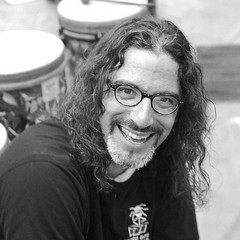 Ed's chemistry is about soul, feel, emotion and groove. He has facilitated events for P.A.S., NAMM, WGI and other organizations while continuing to inspire, motivate and help bring passion back into peoples’ lives through rhythm. Since starting Bongo Boy Music School in 2003, he and his staff of instructors and facilitators continue to bring music and rhythm to the masses. With hundreds of students studying instruments of all types, his vision grew from having a private music school to adding the all new Bongo Boy Recreational Music & Wellness Center to the mix in 2006. Here, we can accommodate school field trips, Free Community Drum Circles, Women’s only drum circles, Kids Rhythm Club and countless other programs for teens-at-risk, parent support groups, special needs programs and more. He also facilitates in school programs, artist in residence programs, along with corporate team building and ice breaker sessions.

Growing up in Northbrook, IL, Ed started his musical career at age six on piano and saxophone. He studied classical and jazz throughout his early years, while at the same time taking up marimba and vibraphone. By the time he was in eighth grade, he was playing four-mallet marimba and vibe pieces at college levels. His playing progressed through his high school years winning awards and contests in both jazz and classical performance. After being accepted to Indiana University School of Music for percussion performance, Ed’s studies grew to include drumset and world percussion, composition, music production and songwriting.

Since then, Ed has continued to bring his sound, rhythm and energy to many national acts on the road and in the studio. He has shared the stage, performed & toured with artists such as John Prine, Jill Sobule, Dar Williams, Todd Snider, Bonnie Raitt, Eddie Money and Bob & Tom, just to name a few. The time and work Ed put forth touring with Prine helped earn the band a Grammy nomination for the album, "John Prine Live On Tour". He has also performed on such shows as Jay Leno, Conan O' Brian, and Austin City Limits, along with numerous national syndicated radio shows and local live broadcasts. Ed is one of the top call drummers & percussionists in the Indianapolis recording scene and performs on a regular basis.

Ed is motivated and passionate to have a place where he and his staff can continue to inspire people with the gift of rhythm. He believes everyone has and should have the freedom to laugh, smile and partake in music making in one way, shape or form.