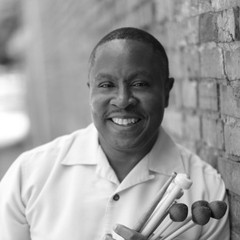 Dr. Don N. Parker serves as Chair and Professor of Music (Percussion) at Georgia College and State University. Don recently presented a panel discussion on Developing the 21st Century Musician at the NASM 2017 conference in Phoenix, Arizona. At the HBCU forum he served as the artist in residence for the River City Drum Corps for their inaugural percussion ensemble in Summer 2014, and guest clinician for the annual Keeper of the Dreams Celebration in Louisville, KY in January 2015. In 2011, he served as the guest conductor for The HBCU-NBDC All-Star Percussion Ensemble in Atlanta, Georgia and Percussion Instructor at the H.O.P.E. Summer Percussion Camp at the University of Louisville in Kentucky. He performed with the Fayetteville Jazz Orchestra and Fayetteville Symphony Orchestra from 2003 thru 2019 as a featured soloist and served as principal percussionist. He currently performs with his trumpet/percussion duo, Double Take, which released its second CD in 2008 entitled “Atmospheres” featuring commissioned works and his jazz vibes and piano duo, The Haydon/Parker Duo, which released its second CD in December 2015 entitled "Reunion", available on the ACA Digital recordings/ Albany Record. He is the director for the Summer Music Camps @ FSU. Don contributed a teacher resource guide to “Teaching Music through Performance in Jazz Vol. I“ compiled and edited by Richard Miles and Ronald Carter, released in 2007 through GIA Publications as well as the recently release of Vol. II in December 2015.