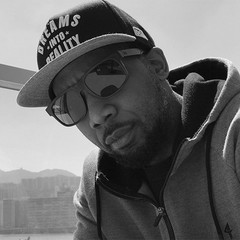 Dom is a dedicated percussionist from Philadelphia who began to travel & study percussion at the age of 14. He and his mom traveled to Senegal & Mali West Africa to study drum and dance with the National Ballet of Mali along with other masters. He then attended Berklee college of Music to further his studies.

Teachers He continued to learn under some of the greatest players such as Giovanni Hidalgo, Horacio Hernendez, and great friend and mentor Doc Gibbs of the “Emeril Live” cooking show.

Experience Dom has played with a number of groups and bands in and around the tri-state area, starting with his mother as the lead drummer of a West African drum and dance group called “Kuumba”. He later toured with the Apollo Circus of Soul band as the percussionist. Continuing on his journey Dom has played with some of the top hip/hop & R&B artist such as Questlove & Black Thought from the Legendary Roots Crew, Mos Def, Raheem DeVaughn, K’Jon, Syleena Johnson, Kindred The Family Soul, touring and performing on “Dancing with the stars & Jay Leno” with Grammy award winning R&B singer Maxwell, ended 2013 on a 16 city tour with Grammy nominated R&B artist Jaheim. In 2014 also performed in Johannesburg, South Africa with Jaheim. In 2015 played on “Jimmy Kimmel” & Centric presents the “Soul Train Awards” with Philly’s own Jill Scott, all which landed me a full time spot as her percussionist. In March 2016 he also landed the position playing for Eminem and did the 2016 South American Lollapalooza Tour. The entire summer of 2016 we toured Europe (North Sea Jazz Festival) & the US with Jill Scott also doing shows in Tokyo, Japan. October 2016 performed on the Ellen Degeneres show with John Legend which landed me the full time percussion position. In 2017 I toured more than half the year starting in the U.S., Europe, and South Africa with John Legend as well as doing a show in Hawaii while finishing the year touring with Jill Scott. February 2018 we did the Dubai jazz festival with John Legend as well as a month long Asia tour. We also did U.S. tour with Jill Scott and currently gearing up for a end of the year/U.S. Christmas tour with John Legend.