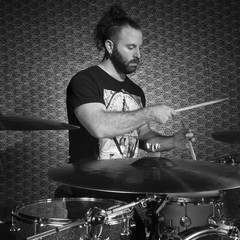 In 2003 after just turning 19, Dave decided to relocate from the small town of Sebastopol in Sonoma County to Los Angeles. Dave spent much of his first several years finishing up his AA in Music from Santa Monica College and playing many local shows around town with a variety of different bands ranging from straight ahead jazz to metal. From 2006-2008 Dave was in the hard rock band Daughters of Mara, who was signed with Virgin/Capitol Records. In 2007 they recorded their debut album with producer GGGarth Richardson and producer/engineer Josh Wilbur. Unfortunately, after the buyout of EMI, the record was shelved. In addition to live performance Dave was featured on the best-selling Gospel Chops drum DVD entitled Shed Sessionz Vol. 2 where he had the chance to play alongside and “one on one” with some of the best Gospel/R&B drummers in the industry. Dave has been teaching for 10 years and is one of the most in-demand private teachers in the Los Angeles area keeping a steady clientele of 20-30 students/week. In addition to teaching privately, he also has done drum clinics as San Jose State University and The Drummers Collective in Manhattan, NYC. Dave has also studied with Toss Panos, Jason Gianni, Mike Mangini, Frank Briggs, Billy Ward, and Russ Miller. Dave is also a busy session player having just finished the Virgin/Capitol band Kill Korps record with producer Logan Mader. ( Soulfly, Machine Head, Devil Driver) He has also worked with GGGarth Richardson, (Rage Against The Machine, Mudvayne) Josh Wilbur (Lamb of God), Jason Suecof ( Trivium, Bury Your Dead) and Sean Beavan (NIN, Marilyn Manson) among many others. Recently, Dave was asked to go on tour with Grammy award winning band The Mars Volta, touring throughout Europe, Australia and New Zealand playing for as much as 55,000 people while supporting Muse on the Big Day Out tour.