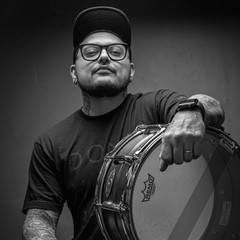 David “The Cardinal” Cardona.  Born in Colombia, moved to the UK in 2012 to pursue a career as a drummer. As an attempt to stand out amongst other musicians in the London scene, David took his cheap portable camera and started recording himself playing drums. Shortly his videos started getting attention on social media and the idea of becoming a working musician started to become a reality. David has worked with many Metalcore bands in the UK such as AVIIRA among others. His style can be described in one word: “Powerhouse”. In David’s words: “Recording videos has become a massive part of my day to day. Social Media and the hunger to connect people across the world is an indescribable feeling, I’ll put it in two words: Passion & Joy”. David will always keep as one of his priorities to give advice to aspiring working drummers and help them develop the right skills for a successful career in modern Music Industry.

His main project at the moment is the Christian Pop/Punk band, Life Avenue.