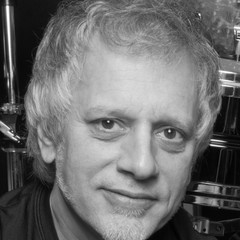 For more than 20 years, Dave Weckl has developed and maintained a reputation among fans, peers, and the international music community as one of the great living drummers. For this, he has received numerous accolades and honors; Modern Drummer inducted Dave into their Hall of Fame and named him "one of the 25 best drummers of all time."

But these honors, in addition to many more bestowed by the music community, are the product of Dave's undying commitment to making great compositions. Dave's incredibly dynamic and diverse drumming, which has inspired musicians worldwide, is built on a solid foundation of knowledge and respect for music.

Born in St. Louis Missouri, January 8th, 1960, to a mother who loved music and a father who played the piano as a hobby, Dave started playing drums around the age of 8.

During his high school years, Dave received many awards from the NAJE (National Association of Jazz Educators) for outstanding performances in his high school's competition-winning jazz band. He was involved with numerous local groups from a very young age while studying with St. Louis-area teachers Bob Matheny and Joe Buerger.

At age 16, Dave began to work professionally with local pop and jazz groups. In 1979, he moved to the East coast to study music at the University of Bridgeport in Connecticut. At just 19 years of age, Dave was getting recognized.

While playing the club scene in New York City with a band called Nite Sprite, Dave started to receive accolades from established studio musicians such as Steve Kahn, Michael Brecker, and especially drumming great Peter Erskine. It was Peter who recommended Dave for his first 'big gig' in town with a group called French Toast, forerunner to the Michel Camilo band, which has been recorded quite extensively over the years.

From this group, legendary bassist Anthony Jackson recommended Dave for the prestigious Simon and Garfunkel reunion tour in 1983. After this tour, it was not long before Dave was regularly being called for radio and TV jingles, sound track sessions, and top recording dates with such artists as George Benson, Peabo Bryson, Diana Ross, and Robert Plant, to name a few.

In 1985, Michael Brecker suggested to Chick Corea that he look into Dave's services for his new Elektric Band. That was the beginning of a seven year relationship with both the Elektric and Akoustic Bands, where nine recordings and three videos were produced, including a Grammy for the first Akoustic Band release.

The Elektric Band showcased Dave's cutting-edge drumming and innovative use of electronic and acoustic drums, bringing him world-wide recognition. Though the Elektric Band went on a 10-year hiatus in the early '90s, the band is once again touring from time to time. It also released a 17-part conceptual album entitled "To The Stars" in mid-2004.

As a solo artist, Dave has recorded and produced nine recordings to date, including GRP/MCA solo releases Masterplan, Heads Up, and Hardwired. In 1998, Dave realized his long-time goal of forming a world-touring band. To date, the Dave Weckl Band has released five studio records, including: Rhythm Of The Soul, Synergy, Transition, Perpetual Motion, and Multiplicity. The band also released its hot live album, LIVE (and very plugged in) and a compilation of DWB and instructional videos entitled The Zone.

The DWB keeps Dave very busy, but he still enjoys sideman work. Dave regularly joins guitarist Mike Stern, among others. When off the road, Dave keeps busy with session and production work at his home studio in Los Angeles. He also accepts a limited number of private students - and offers classes through the Virtual Drummer School. Additionally, Dave has many instructional video/DVDs and play-along packages on the market.

A constant student of the art of drumming and music, Dave gives back every chance he gets through clinics and classes all over the world. Of teaching, Dave says:

"It is my goal to inspire as many young (and not-so-young) people as possible to want to play music, whether it be on drums or another instrument. With all the negatives in the world today, I feel this is my way of contributing a positive action toward spiritual happiness, which music can be a big part of, if you let it. So parents, if your child has a talent for music, please allow them the opportunity to develop that talent!"

Of course, a guy this busy does need to get around town efficiently. A fan of automobiles, Dave stays on schedule by driving a 440 horsepower Lingenfelter Camaro (read about it here). With a 0-60 time of 4.2 seconds, you're not likely to see him out on the L.A. highways - but you're bound to hear him!

But beyond all the recording, producing, touring, teaching, working with companies he endorses to build better products, and tearing up the highway every now and then, Dave's passion is spending quality time with the two ladies in his life; his wife, Ninoska, and his daughter, Claire.

This is what all the hard work is for - the inspiration to keep doing it - and that perspective is probably Dave's biggest asset.