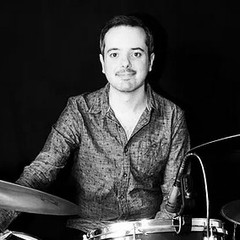 Dave Tandy is a freelance drummer based in London, UK.

Dave works closely with artists and composers to produce custom made live drum tracks from his home studio - The Drum Recording Studio. Clients include: Audiomachine, Disney, Hulu, Netflix and Working Title.  Dave's highly equipped home studio enables him to record, mix and master everything from solo drums to full 'remote' band recordings and deliver studio quality results for his clients.

Originally from Birmingham, Dave began playing drums at the age of 11.  In 2001, he joined the Midland Youth Jazz Orchestra and also started playing in other local rehearsal big bands which gave him the opportunity to meet other musicians and to develop as a versatile drummer, this led to regular appearances with the Syd Lawrence Orchestra from 2010 and he has occupied the drum chair since 2012.

After years of travelling between Birmingham and London for various gigs and sessions, Dave permanently moved to London at the age of 25. He has since gone on to work with many diverse artists and producers at venues such as Abbey Road Studios, AIR Studios, Ronnie Scott's Jazz Club and Boisdale Restaurants.

In 2018, following several tours and an album recording with Brian McFadden, Dave was selected by the former Westlife member and chart topping artist to be the musical director and drummer for his 'Soul Jam' tour of South Africa.

Since 2019, Dave has continued to perform and record with many highly acclaimed musicians, most recently with Omar Kamal for his 'Show Me The Light' tour, Andrew Cottee’s Dream Town Orchestra and a tour of Scotland with the BBC Scottish Symphony Orchestra.