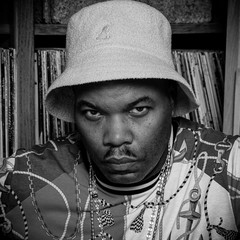 Daru Jones is one of the most respected drummers of his generation. Born to two professional musicians, he began playing the drums at the age of four. Though he got his start in the church, Jones has been influenced by musicians from a wide range of genres. These eclectic musical tastes have carried over into his own career as he has recorded, performed, and toured with renowned artists and producers such as: Jack White, Slum Village, Talib Kweli, Black Milk, Dwight Yoakam, Jamie Lidell, Pete Rock, Salaam Remi, Gloria Gaynor, Kim Burrell, Rance Allen, Black Violin, Ski Beatz & The Sensei’s, Lorenzo Jovanotti and Jon B (partial list). Alongside these artists, Jones has graced the stages of some of the most revered events in the music industry, including: One Mic: Hip-Hop Culture Worldwide! A 20th anniversary celebration of Nas debut album Illmatic, the 2013 Grammy Awards, Austin City Limits, Rock The Bells Festival, and the Montreux Jazz Festival. Receiving rave reviews from: Rolling Stone Magazine, LA Weekly,and USA Today (partial list), he has also appeared on several national and international television programs: The David Letterman Show, Jools Holland (UK), The Colbert Report, Saturday Night Live, and MTV.

Jones is also a sought-after producer and boutique label owner who develops talent and releases music through his imprint, RUSIC RECORDS, LLC. The Brooklyn, NY and Nashville, TN-based producer/musician exhibits a unique approach to beat-making that incorporates live drum loops, jazz and gospel samples, and a soulful musicianship into all of his projects. Over the past decade, Jones has produced and released a catalog of projects he classifies as “soul-hop” featuring collaborations with vocalists and rappers: Kissey Asplund, Ishe', Jasiri X, Reggie B, Rena, AB, and Eagle Nebula, among others. In addition to these RUSIC projects, Jones has produced original and remixed tracks for recording artists including : Muhsinah, iSHE, Jessie Boykins III and Kendra Ross.

2015 was an amazing year for Jones. His performance on “Lazaretto , ” the first single from Jack White’s second solo album of the same name, helped White earn a 2015 Grammy for Best Rock Performance. Jones has also received high accolades for his performances on the Lazaretto Tour (his second with White). Most recently, he was featured on Esquire.com, declared the “Unsung Hero of Coachella 2015″ by Fuse.tv, and named “Best Drummer of Coachella 2015″ by the LA Times Music Blog, Pop & Hiss.

Jones recently wrapped up the Lazaretto Tour with White and is currently touring the globe with eclectic soulster, Jamie Lidell in support his latest release, “Building a Beginning.” Jones and RUSIC RECORDS are currently prepping for an upcoming release from supergroup, DMD the Vibes featuring Jones, guitar wunderkind Marcus Machado, and legendary Living Colour bassist, Doug Wimbish, also currently performing with hip-hop producer, Pete Rock, and a member and music director for his new live band, The Soul Brothers.

"Remo's been apart on my life since I started playing at church to professional.  I've always loved the great quality and that SOUND!"  -Daru Jones