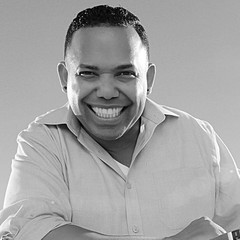 Born in Santo Domingo, Dominican Republic, Daniel Peña’s career as a percussionist began at the age of 8 years old, when he first learned how to play the cowbell. Coming from a rich musical legacy also helped shape Daniel’s passion for music. His father, a classically trained accordionist, and Daniel’s grandfather, a “tamborero” (tumbadora drum player) playing “perico ripiao” styled merengue, were great influences in Daniel’s youth. Daniel’s fire for music ignited into full blaze after attending Fania All Star salsa legends Richie Ray and Bobby Cruz’ stellar performance in his native country, realizing that his passion for music was larger than what he intended it to be. Although Daniel used the Fania sound as his guide for percussionist training, he moved to New York City at the age of 16 and had the opportunity to joined an evangelical church band while taking classes with Roberto Arias and Carlos De Leon, learning to play congas and timbales. Later on, the noted Santos Rigo Irizarry trained Daniel utilizing the Fania sound, creating an indelible mark in Daniel’s musical training. “The great body of work that the ‘Fania Sound’ provides is like a university of music. It’s a school of our great Latin American heritage and it is an honor to bring that love and respect I have for Fania in everything I do.” Moving to Miami in 1999, Daniel played with Ana Mendez and the Rumbo del Caribe band, making many of his dreams as a musician come true. He played in the Tite Curet Alonso tribute concert alongside Fania greats Larry Harlow, Adalberto Santiago, Tito Allen, Justo Betancourt among other Fania All Star legends. In recent times, Daniel frequently collaborates with another noted bandleader, composer and producer, Marlow Rosado, playing with Tito Puente Jr.’s orchestra. Traveling the world and recording has made Daniel into one of Miami’s top percussionists, playing with Jerry Rivera, Jose Alberto “El Canario”, Ismael Miranda, Ray de la Paz, Charlie Cruz, Cano Estremera, Cuco Valoy, Anthony Cruz, to mention just a few. “Out of all the Fania greats, my biggest influence has to be the great Johnny Pacheco, for his musical legacy is what makes me want to become a better percussionist out of respect for the great musicians that are a part of the past, the present and future of Latin Music”. Mr. Respect, as Daniel is affectionately called by his peers in the music industry, launches his own musical production entitled “Eleven” which contains ten majestic songs. In it, Daniel implements his fugacious energy and musical magnetism in each song such as: , Inseparable with Jimmie Morales y Tito Allen, Lirio de los Lirios with Richie Ray y Bobby Cruz, La Sangre y la Experiencia with Tito Puente, Jr. In May 27, 2017 Daniel Peña released his second album named “Sancocho” under the Muzik Connection Record label. Sancocho is a Merengue, Salsa, Bolero, Son Montuno and Latin Jazz album.

As he done in the past Daniel, find the common ground that connects with people with different musical tradition, most superbly with the single Soledad featuring Ismael Miranda.

And, as always Peña brings passion to every song.

Daniel Peña’s conga will play at the beat of his audience’s heart with his new production for a long time to come. Daniel Peña is honored to be endorsed by the best in the industry. He has been part of the Remo family for the past five years and proudly displays his personalized congas, courtesy of Remo. He is also endorsed by Vic Firth, Soultone Cymbals, Westone and Jorg Gray. Daniel Peña is a proud member of the Latin Recording Academy and The American Society of Composers, Authors and Publishers.