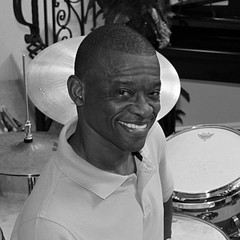 Los Angeles, California native Clayton Cameron began showing an interest in drumming at the young age of seven. According to Clayton, his parents were always supportive of his pursuits and they bought him a drum kit and had him taking lessons by the time he was twelve. After High School, Clayton went on to earn a degree in Music from California State University. While in school he played around the Los Angeles area with some of his mentors and early influences such as Ernie Andrews, Teddy Edwards, Larry Gails and Gerald Wilson. After graduating from college, Clayton settled in Las Vegas where he played regularly with a small Jazz trio known as The Kirk Stuart Trio and continued to develop his skills as a brush player. Clayton quickly found that the small jazz club settings and trio groups called for mostly low volume playing, and as a result, Clayton developed a distinct and potent style of brush playing. Today, Clayton is widely known as a brush master.

During his time in Las Vegas, Sammy Davis Jr..'s musical Director George Rhodes hired Clayton to be his drummer. Clayton cites Sammy Davis' tap dancing as an influence on his brush playing. Clayton also played drums for Dean Martin and Frank Sinatra during this time. In 1988/89, Clayton toured with the three members of the "Rat Pack" an experience he will always treasure.

In 1990, Clayton completed and released his instructional video entitled "The Living Art of Brushes". This was the first drum instructional video dedicated to brush playing. At this time Clayton also toured with Jazz legends Joe Pass, Joe Williams and George Shearing.

In 1993, Clayton became the drummer for music legend Tony Bennett. He has recorded six Grammy nominated albums and played on many world tours with Tony. In 1994, Clayton shared in the honor of Tony Bennett's Grammy award for his "Tony Bennett Unplugged" album. This was the first Grammy awarded for a live recording.

Clayton has also released the book Brushworks, a comprehensive text on the subject. Aside from being the definitive reference book on the art of brushes, Brushworks will for the first time allow novice brush players insight into the mechanics of the art form. Clayton continues to tour and record, and work on his many drumming education projects.