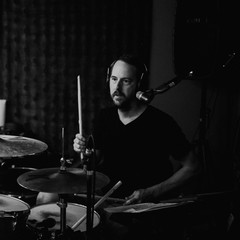 Chris Hesse was born in the outskirts of Humboldt County, a lush costal area of northern California. His mother and father were both active musicians and encouraged him at an early age to follow in their footsteps. He started at age 5 with piano which he kept up until his mid teens when guitar and drums became more enticing. Somewhere inbetween he also took vocal and guitar lessons, broadening his musical horizons. In middle school he decided to pick up the drums thinking that his father had played them his whole life, maybe there was something to it, thus beginning his career as a drummer.

Chris's experience in piano helped him excell in all types of percussion, bells, tympani and many others. He joined every school band and ochestral group his small town had to offer. Through these groups he met a talented clan of musicians from a neighboring town. He began playing with these kids, forming a handful of different bands.

When two of them decided to move to LA and attend Cal Arts he moved with them. Instead of enrolling at Cal Arts he started answering adds in the recycler for "drummers wanted", all the while crashing in his friends dorm rooms and attending classes un-announced. The second add he answered was for the band that would become Hoobastank.

Hoobastank's self-titled debut album was an immediate success, going platinum in the first year. Their sophmore album has reached 3.5 million world wide and is still going.