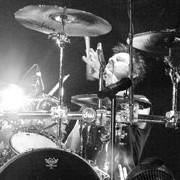 Christopher Ridgeway Frazier was born in Bethesda Maryland in 1967. By the time he was three years old he was turning the plastic wastebaskets over and playing along to stones records with wooden spoons he stole from the kitchen. Seeing his propensity towards banging on things his mom gave him his first drum kit at the age of five.

Coming from a musically active family he was exposed to many forms of music and began playing professionally at the age of ten. He performed at high school dances, parties and sometimes a club if he could get away with it. His mother was a folk singer in the Massachusetts area so he traveled around with her while she sang in clubs, which primed him for life on the road. Though junior high and high school he participated in concert band and jazz band as well as playing in his own projects. He went to Colorado University on a partial music scholarship and attended for two years until deciding to try out L.A.

Arriving in Los Angeles and looking for work, he answered adds in the music connection. He scored an audition with Steve Vai who was producing a project and eventually began working with Steve on his projects. Chris recorded on various recordings spanning from 1985 to 2000 including "Flexable","Passion & Warfare","Firegarden" and "Living in an Ultra World". Chris also toured extensively with Steve from 1992-2001 opening for Bon Jovi in 1992 to headlining the White Nights festival in Russia in '93 as well as multiple trips to Japan, South America and Europe.

In 1989 Chris was hired to perform on a record for Warner Brothers entitled "Private life", A pet project of Eddie Van Halen and Ted Templeman. The record failed unfortunately but Chris was hired again by Ted for other various recordings like, "Wayne's World" soundtrack,"Gremlins 2" soundtrack and Tia Carrera's solo effort.

The studio work was stimulating and sometimes made ends meet, but Chris was more drawn to his dream of being in a band and touring and ultimately being creative without restrictions or boundaries. An opportunity came to work with Tribe After Tribe, a South African band based in L.A. The band had an alternative/world approach to their music requiring a percussive/kinetic drummer. Chris worked with the band from 90-93, performing on "Love Under Will"(Megaforce/Atlantic Records) and toured America and Europe opening for Pearl Jam and Saigon kick. As stimulating and musically fulfilling as the band was, it was at odds with the big machine. The record company filed chapter 11 and the management was not far behind. The band wasn't an overnight success and couldn't survive the support team crumbling around it. Such is life.

After the split with Tribe after Tribe, Chris supported himself with studio work such as performing on "That Thing You Do" soundtrack and various commercials and Japanese projects and demos. He also co-produced and performed on two instrumental CDs with Doug Aldrich. Doug is a fiery guitarist with the same interests in rock and jazz from the 70s. "High Centered" produced by Andy Johns is a exploration in soundscapes derivative of Zeppelin to Hendrix while "Electrovision" is more Mahavishnu/Beck influenced. Both on Pony Canyon/Japan.

Most recently Chris played on Sera Masanori's new CD entitled "Twist Songs" and performed with Sera for two exclusive Japan shows in October 2003. Also performing in that lineup was Marty Friedman, Doug Aldrich and Roy Z. Chris also performed on Edgar Winters latest jazz CD entitled "Jazzin the Blues", recent solo CD by vocalist Michael Sadler(SAGA) and nu-metal band Speak No Evil's CD's. "Welcome to the Downside" & their debut self titled effort. Chris did a very successful tour of Japan with TMG which stands for Tak Matsumoto Group. The lineup was: Tak Matsumoto guitarist and songwriter of the B'z, Eric Martin (singer of Mr. Big), Jack Blades (bassist and songwriter from Night Ranger) and Chris on drums. Chris toured with Eddie Money and Edgar Winter from 2005 to 2007. From 2007-2010 he was a member of Whitesnake and recorded their record Good to Be Bad.  Chris has been a member of Foreigner since 2012.