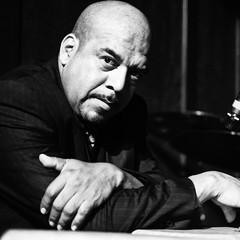 Carlos “Charlie” Chávez is a virtuoso percussionist whose performances are a fusion of his exquisite talent, his passionate spirit, and his rigorous study of the history of Latin percussion. In addition to performing, Charlie is also a devoted bandleader and a dedicated educator.

Charlie was born in Juchitán, Oaxaca, and grew up in Coatzacoalcos, Veracruz. The city’s rich Cuban and Caribbean Rhythms had a profound influence on Charlie’s decision to pursue his formal education in music.

The Conservatory of Music at the University of Xalapa in Veracruz is where Charlie studied Trombone, Percussion and Piano from 1996-2001. In order to broaden his professional opportunities, Charlie moved to Tijuana in 2001. Since then, he has also performed extensively in Tijuana and in San Diego.

Because of his natural musicality, Charlie has continued to broaden his repertoire of Latin percussion instruments which has earned him respect among his peers. In 2001, Charlie toured Europe and the United States with Lila Downs and Maldita Vecindad. He has also performed and shared the stage with some of Jazz and Latin music’s greatest artists including Poncho Sanchez, Charles McPherson, Gary Burton, Chuchito Valdez, Raul Pineda,The Spanish Harlem Orquesta, Denise De Kalafe, Iraida Noriega, Israel Varela, Celia Cruz Salsa Orquestra from Los Angeles, and Paquito D’Rivera in Boston .

Because of his relentless drive and his love for Latin percussion, Charlie has become one of the most important percussionists in Southern California performing with Gilbert Castellanos Latin Jazz Ensemble, Dave Scott Jazz Trio, Orquesta Binacional de Mambo, B Side Players, Allan Phillips Project and Agua Dulce Band. He also heads his own salsa group, Afrotruko, which has not only performed at major venues and festivals in Southern California, but has also opened for some of salsas biggest stars. In 2012, Charlie Chávez y Su Afrotruko Salsa Band was selected to open for Ruben Blades concert on the 30th Anniversary Celebration of Tijuana Cultural Center; Oscar de Leon a Puerto Rican band and Plena Libre, in San Diego.

Most recently Charlie has formed his own Latin Jazz Quintet and the New Mexican Regional Trio Perla Negra .

In addition to performing and teaching, Charlie has also been asked to lead percussion clinics in México City, Humbolt University in California and Berklee School of Music in Boston. Moreover, he has organized master percussion workshops in San Diego bringing in world class percussionists Georgie Padilla, David “La Mole” Ortiz, Tomasito Cruz, Pablito Rosario ,William "Kachiro" Thompson. And the Great Jose Luis Quintana “ Changuito “ 2012 Charlie is also Guest Instructor at Mesa College in San Diego. When not performing, Charlie is instructing the next generation of Latin percussion players. His weekly classes meet in Tijuana and in San Diego.

Quote: The Remo Conga drumheads have been a blessing to me. The feel and natural sound I get from them are golden. My hands are very happy that I use Remo drumheads…Thank you Remo, you are the best!