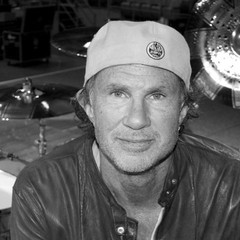 Chad Smith is the powerhouse behind the US super group Red Hot Chili Peppers. Chad pulls off effortlessly one of the most difficult challenges facing drummers, the ability to blend high powered rock with blistering funk grooves. With a personality as big as his drum sound, Chad remains a firm favourite with drummers all over the world. Chad is one of the few drummers to have appeared on the 'Simpson's', Aerosmith's Joey Kramer is another.

Whether it was his performance at Woodstock 99 wearing a giant light bulb on his head or in a witch doctor outfit on the cover of Modern Drummer's August 99 issue you remember first, it's hard to forget the infectious beats on such tunes as Give It Away, Higher Ground, Under The Bridge, and most recently Lonely View. Highlighting their contribution to the music video genre, the band was presented The Video Vanguard Award at The 2000 MTV Music Awards and followed up with a blistering performance.

With numerous platinum recordings under his belt with the Red Hot Chili Peppers, Chad Smith has gained the recognition he has long deserved by cranking out one hit groove after another.