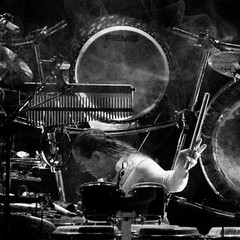 C.G. Ryche is a World-Class Multi-Percussionist who has traveled the world as a Performer, Educator & Clinician. Widely known for his Dazzling Showmanship & Serious Chops. C.G. has made special appearances with Artist such as, Wayne Newton, Ambrosia, Kevyn Lettau, Medhi, Perla Batalla, & Samba Nova to name only a few. C.G. has Performed as a Featured Artist as well as assembled Drum & Percussion ensembles with some of the Top Players in the world for Companies like Disney, Latin Sphere, NAMM & Benise as well as some of the biggest Drum Festivals in the U.S.

Praised for his Ground- Breaking Performances with Benise, C.G. also arranges & choreographs all percussionist for Benise's live and filmed performances as can be seen on both of Benise DVD's, "Spanish Nights" and "Nights of Fire" as well as their 2006 World Tour including an array of African, Afro-Brazilian, Korean & Afro-Cuban percussion.

With Numerous Recording, Film Scores as well as T.V. & DVD appearances under his belt and features in Modern Drummer & Drum magazine C.G. desires to continue to push the envelope both sonically & visually work with some of the Biggest & Brightest Stars in the industry as well as push the percussion envelop to audiences abroad while leaving a lasting mark that Honors & Respects his peers.