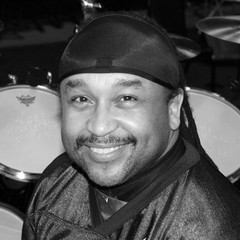 Carter Beauford grew up in a household full of music. Everything from jazz, gospel to the Beatles was played. For Carter Beauford, it all started when he was three years old. His father was going to a Buddy Rich concert, but he couldn't find a babysitter for young Carter. His only solution was to take Carter with him. From the moment Carter laid eyes and ears upon Buddy Rich, he was enthralled and facinated with Rich. After the concert, the young Carter took up drums and wanted to emulate Buddy Rich. I guess you could call Buddy Rich Carter's idol when he was a young lad. Upon hearing his son's playing, Carter's father was impressed and bought him a Roy Rogers drum kit made with paper heads and tin shells. This was all Carter needed. So thank Carter's father for bringing this wonderful drummer into the world! During those young years, Carter's major influences were Tony Williams, Papa Jo Jones, and of course, Buddy Rich. Throughtout his career, Carter has played with many different bands with various musical styles. Carter feels it is important to have an open mind musically and to expose oneself to different forms of music. One band, besides the Dave Matthews Band, that Carter is very proud of was called, Secrets. This band played the Richmond, Virginia area and was composed of many talented musicians, including Carter on the drums. After this band dissolved, Carter went to California to try out for the Arsenio Hall show. For whatever reason, the Show didn't want Carter, so he moved back to Virginia; which is where the next chapter of his life starts.