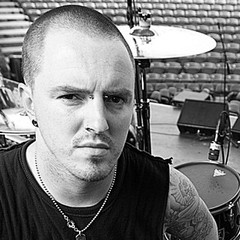 Branden Steineckert was born in Pocatello, ID in 1978. He moved around with his family numerous times but has spent most his life living in various places in Utah. At age 15 Branden felt a desire to start playing drums to take after his father who passed away when Branden was only 11yrs old. After a few drum lessons Branden lost interest in a practice pad and sheet music. At 16 Branden got his first drum set and began learning by ear and started his first band. Branden loved to play everything from punk rock, hardcore, funk and ska in his early bands. Drums were a good escape for Branden from an abusive home and friends who were diving heavily into drugs and alcohol. Branden has maintained a 100% sober and drug free lifestyle throughout his entire life and career. At 17 Branden dropped out of high school and began to pursue music.

After years of homelessness, several bands and living in the small, unknown local scene in Utah. Things finally began to look up. In 2001 Branden started a band he named The Used which consisted of old friends/bandmates from the Utah music scene. With home demos Branden recorded and produced himself he hooked up with Producer John Feldmann which led to a demo produced by Feldmann that got the band a deal with Warner Bros Records. His debut album reached Gold record status in the US and Canada. The next four years Branden released 2 live DVDs and another studio album which all achieved Gold record status as well in the US, Canada, Japan and Australia.

Branden was not like his other band mates. He spent his free time producing bands in his own studio called Unknown Studios, doing studio drum work and hired drum gigs for various artists such as Milla Jovovich, Perfect Circle, Johnette Napolitano, Secondhand Serenade and Mercy Killers (to name a few), and started a skateboard company called Twenty Twenty Skateboards.

Brandens favorite music was always punk. He found music late in life through art when his sister would have him draw her album covers of bands to hang in her room. She always suggested he listen to the bands while he worked on them. From that and among friends Branden discovered The Clash, Social Distortion, Nine Inch Nails and Red Hot Chili Peppers. Which still rank among favorites of his. Punk rock just clicked with Branden, something he could identify with. "I loved music that felt a little dangerous" says Branden. Bands like Nirvana, Rage Against The Machine, Green Day and Rancid soon became favorites of Brandens and the source of where he learned to play drums. Branden always appreciated music that pushed the boundaries and drumming that took a more "song writer" approach.

After being kicked out of his band Branden was receiving great support and advice from good friends and incredible artists. In Oct of 2006 Branden and his wife Spike were making their way to Salt Lake City from their hometown of Orem, UT to see Rancid who was playing 2 nights in SLC. On the way to the show Branden had a long pep talk from Max Weinburg who had been calling regularly to give advice and support. Branden was greeted warmly by his friends and long time idols in Rancid. After the show the whole band and crew gathered on the bus and talked with Branden urging him to keep hopeful and that something will work out. Branden went home with a sense of optimism and the flame of ambition burning brightly once again.

2 weeks later Tim Armstrong called Branden to inform him Rancid drummer Brett Reed had quit Rancid. Rancid was scheduled for a sold out UK tour less than a week later. Tim asked if Branden would do the tour. "I was given 25 songs to learn in 3 days" says Branden, "My stomach was a mess". The day after Halloween Branden flew to LA to rehearse with Rancid. The band played 3 songs and knew there was something special there. After a couple more songs the band took a break. Right then Branden was asked to be a full time member of Rancid. "They gave me 15 more songs to learn that night, then we rehearsed one more time and left for the UK. Both rehearsals combined weren't even as long as Rancids set. I was playing songs on stage that I had never even played on drums in my life. They'd just throw songs at me during the day and we'd play em that night. It was madness" remembers Branden.

Branden has toured heavily since joining Rancid in 2006 and they have just finished a brand new album set to release summer 2009. Rancid will be doing a 2 month North American arena tour with Rise Against this summer. In his off time Branden is still producing bands of all genres out of Unknown Studios and enjoys soccer, boating, 4 wheeling and skateboarding with friends while home.