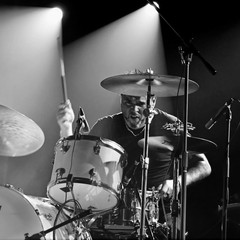 Adelaide based drummer, Brad Polain, was born into a musical family and has been playing drums for as long as he can remember. He did his first gigs in a jazz band with his Dad, at the age of 12 and as a teenager, worked his way through a host of Adelaide bands.

Brad recently completed a 7 year stint with Adelaide based Led Zeppelin cover band, the Zep Boys, taking in their two huge UK and European tours and sell out shows at The Opera House, Hamer Hall, Adelaide Festival Theatre and Burswood Crown. These shows featured a 36 piece orchestra and received huge accolades and rave reviews. They managed to play some of the UK’s most iconic rock and roll venues, including some stages that Zep themselves had played in their early days.

Brad’s main current project is The Hindley Street Country Club, playing drums and singing with a variety of well known Adelaide musicians and vocalists, as well as a few from interstate too. This band has amassed a huge worldwide following through YouTube with over 600,000 subscribers to their channel and more than 250 million views of their songs. A recent Australian tour on the East and West Coasts saw venues sold out weeks in advance and many more gigs are constantly being announced.