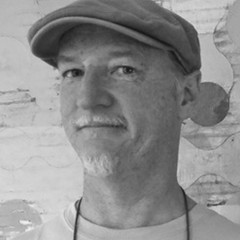 As a member of BMI since 1985, Brad Dutz has produced thirty seven albums as a leader and composed the entire body of

music on more than twenty five of those projects. In 1990 Dutz started his composition studies of multiple scores mainly of

20th century music. He has studied with composers such as Terry Plumeri, Ron Jones, Russell Steinberg. In addition to CD

projects he has composed for Dance companies, Theatre, Documentaries (including Shirkers 2018), Movies, and Silent

Films. Over the last twenty years, his compositions have been featured on numerous CD releases. 2019 saw the sixth

release;’”Dispose of Reality“’ of his quartet project that is now in its 17 th year. This ensemble showcases the unique

combination of mallet percussion, oboe, cello, and bass clarinet and has performed on prestigious stages such as the Angel

Other recent ensembles include - The Other Three (Kim Richmond, John Fumo), Obliteration Quartet(Found objects for

He has recorded more than 270 CDs as a sideman for a variety of artists including Scott Henderson, Steve Smith, Phil

Ron Jones, Michael Waldrop, Nels Cline and many others.

“ITS A SQUIRRELS WORLD”.

As an educator, Brad was on the percussion faculty at Cal State Long Beach from 1997-2020 Taught world percussion at

JEFFERSON elementary school 2016-2020 .. He has conducted hundreds of clinics at colleges and high schools on a

about hand percussion for Warner Bros. He also has two lessons available for download on

Masterclass. Dutz was also selected on twelve different years to perform and present at the International Convention for the

Percussive Arts Society. Brad wrote a monthly column for Drum Magazine on hand percussion and he has written four

books full of his compositions: Manipulations In Sound And Time, Practicing Music on Hand Percussion, and Percussion

Pieces For Duos, Trios and Quartets, and Duets with WABICH.