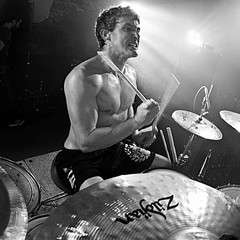 Born and raised in Byron Bay, Australia, Ben Gordon started playing drums at age 11. A part from a few lessons off local teachers, he was mostly self-taught playing the music he loved which was Punk, Hardcore and Metal. In 2002 at the age of 16, After being in several smaller bands, Ben got some friends together to start a band who were to become the most formidable force Australian heavy music had ever seen… Parkway Drive.

Parkway Drive have never taken a step backwards since their forming, they have not only conquering Australia but have also become wildly popular in Europe, UK, USA and Asia, selling out venues all over the globe.

Parkway Drive’s 2010 album “Deep Blue” was their most successful to date charting in several countries world wide and getting great reviews. One critic writes; “The most notable feature is the drums, and this album for me puts drummer Ben Gordon amongst the best in the world in my eyes, a formidable sticksman and perhaps the driving force behind this band that could well be on the rise to worldwide stardom.”