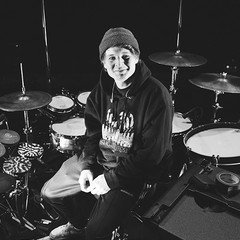 Ben Barter is a New Zealand drummer based in Los Angeles, CA. He is the touring drummer for Lorde and has also performed with such acts as Broods, Jarryd James, Michi and Passion Pit. when not performing he works as a session drummer most notably with LA based producers Tommy English, Jake Munk and Grammy award winning producer Joel Little.

He got his first drum kit at the age of five and played in his family jazz band and school bands while growing up in Auckland, New Zealand. Before becoming a full time musician Ben studied Architecture and worked for Cheshire Architects, TOA Architects and interior design firm Material Creative between touring as a member or of Auckland power pop band, Kingston in 2005. They released two EPs and one full-length album and toured the US, Australia, and Japan. He was also a member of New Zealand hip-hop outfit Kidz in Space and also toured with alternative hip-hop group No Wyld.

Ben began drumming for Lorde at her first public performance at Galatos Basement in 2013. He went on to tour with her in support of the breakout Love Club EP and subsequent, highly acclaimed full-length releases Pure Heroine and Melodrama. The international touring has included appearances at festivals such as Coachella Valley Music and Arts Festival, Lollapalooza, Splendor in the Grass, Osheaga, Governors Ball, Prima Vera and more, as well as television performances on Ellen, Later... with Jools Holland, The Tonight Show Starring Jimmy Fallon, Late Show with David Letterman, the MTV Video Music Awards, the Billboard Music Awards, and the 56th Annual Grammy Awards where Lorde won awards for Song of the Year and Best Pop Solo Performance, Late Night With Seth Myers and others.

After completing the Pure Heroine tour, he started filling in with with Broods including an appearance on The Late Late Show with James Corden and has played drums on some of their recordings. He has also toured internationally with Australian soul artist Jarryd James which included appearances at the Bonnaroo Music Festival and Lollapalooza. Lately he has been drumming for LA Artist Michi both live and on some recordings. Between touring Ben does remote drum recording out of his space in Silverlake and studio sessions for music and film around LA.

He has a solo music project called BB Normal and released his first EP in early 2020.