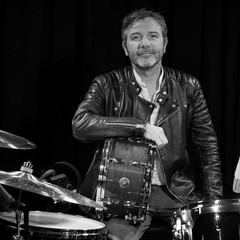 I have been working professionaly as a drummer for over 20 years. My live experince includes tours and performances with many artists including: Performing at Woodstock 94, supporting The Rolling Stones, REM, Bon Jovi, Van Hallen, Oasis and Bryan Adams at Wembley with my first band Del Amitri in 1994-97, to touring and playing with Marianne Faithfull, Sinead O'Connor, Sheryl Crow, Robbie Williams, James Morrison, Will Young, Squeeze, Lewis Taylor, Hamish Stuart, The Waterboys, Jeff Lorber, Trevor Horn and Seal, Rumer, Terry Reid, Ronnie Wood, Dionne Warwick and many more. Other experiences I've had include playing the 2012 Olympic games opening ceremony with Mike Oldfield, being the house drummer on the BBC TV show The Voice and recently I played on the soundtrack for the new Terminator movie due out in July 2015 for composer Lorne Balfe.

The main part of my career has been involved with the recording industry and over the past 20 years or so I have recorded 52 top 20 albums for artists including: Cher, Seal, Robbie Williams, Billy Idol, Adele, Enrique Iglesias, Dionne Warwick and Rumer, James Morrison, Cee Lo, Celine Dion and Ronan Keating. 46 of the albums reached the top 10.

My discography also includes 21 top 10 singles and to date, I've recorded 18 number 1 albums and 11 number 1 singles which have featured on various pop and rock charts around the world.