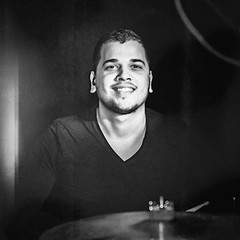 I started my drum lessons at a music school close to my parents’ house in a place called Holendrecht. I would always go there after school. My teachers were Henry Wijnhard and Roberto Haliffi. Henry Wijnhard would soon move on and create his own private drum school, and I decided to follow him there because of the quality of his lessons.

About seven years later I decided, after studying different subjects like computer technology and leisure management, to start up a company with my brother: a rehearsal studio and music school under the name Silver Note Studios. We now have close to 70 students and are growing. We are also branching out to short films because of our passion for visuals and sound.

After spending a lot of time teaching and making YouTube videos about drums and playing for many smaller and bigger acts, I received endorsements from multiple companies, namely: Remo, Istanbul Cymbals, Ludwig Drums, Balbex Sticks, and Sleeved Washers.

I cofounded the company Shed Sessions Worldwide. Shed Sessions is a movement for music talent development – sharing music, sharing musical concepts, networking, clinics, inspiration, and learning how to become better musicians. We’ve had many events in The Netherlands and even hosted one in New York City. All of our events have been featured in Slagwerk Krant and Modern Drummer. We’ve had many prestigious guest clinicians, including Calvin Rodgers, Shariq Tucker, Isaiah Johnson, Jamal Moore, and even Brian Frasier Moore.

Eventually, I realized I missed playing on stage together with other musicians. I decided to do one more audition – for the amazing Sevdaliza – and the craziest part is that I actually got the job. No more than a month after this audition, I was playing for her in Denmark. I’ve now been drummer for Internationally acclaimed artist Sevdaliza for over 3 years. I've been part of the sold out "The Wanderess Tour". That spanned many countries including the continents: The United States, Australia, Europe and Asia.