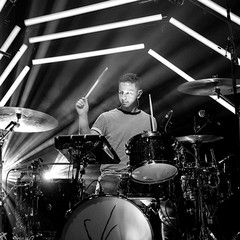 Andrew Marshall grew up in the New York area, where he was exposed to the city’s vibrant music scene at a young age. He received his first drum set at the age of 9. His father nurtured his love of music by taking him to jazz clubs in Manhattan, and he was gigging professionally by age 14.

After graduating from Northwestern University, Andrew quickly established himself as a rock-solid and versatile drummer both live and in the studio and was called upon to tour with Tor Miller, VÉRITÉ, Tkay Maidza, and others. During this time he began experimenting with Ableton Live and augmenting drum setups with triggers, pads, and other electronics, developing an expertise for which he would later be called upon in other professional pop situations.

Upon moving to Los Angeles in 2017, Andrew began working with Billie Eilish, with whom he has toured around the world, playing at festivals like Bonnaroo, Lollapalooza, Coachella, and Summer Sonic, as well as on TV shows including Late Night with Jimmy Fallon, The Ellen Show, and Jimmy Kimmel Live. In between tours with Billie, he records drum tracks remotely for songwriters and artists from his home studio.