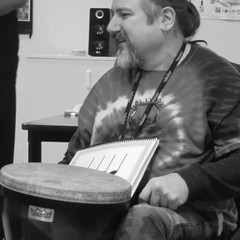 Andrew Hewitt, dubbed as "Australia's most inspirational drummer", is a world renowned drummer from Sydney, Australia. Andrew was born with Cerebral Palsy, which restricts movement in his arms and legs, which forces him to use a wheelchair. This has made drumming a very serious challenge. Despite this, over the past 25 years Andrew has worked successfully as a Performing Artist, Drum Teacher, Drum set Clinician, Motivational Speaker, Workshop Facilitator, and Disability Advocate. Andrew plays and teaches both kit and hand drums depending on the job at hand.

He teaches students from his home in Westmead in Western Sydney and across the internet via Skype. Most of Andrew’s students have a disability of some kind, and the idea isn't to find the next rock star, but to boost the student’s confidence and give them a bit of hope and guidance. Andrew only has one rule when teaching... the word CAN’T stays outside the front door. Over the years, Andrew has performed and hosted drum kit and hand percussion workshops around Australia, and from time to time fills in for percussionist Claudia Chambers with a group she leads called The Sylvan beats, a percussion group consisting of people with living with a disability.

Andrew is an Australian facilitator for TRAP (The Rhythmic Arts Project an educational program using hand drums and percussion, which was founded in 1997 by Eddie Tuduri in Santa Barbara, California. Andrew attended a TRAP Training Seminar in Santa Barbara in 2013. He is also a founding board member of Can-Do Musos a global voice which has been setup to support artists with challenges from all over the world which was established at a meeting at Dom Famularo's Wizdom Drumshed in Port Jefferson, New York on the 15th March 2013. In 2014, Andrew was nominated for the prestigious "Australian of the Year" award, and although he didn't make it as a finalist, it was still a huge honour for Andrew. In January 2015, Andrew presented on a panel with 6 other Can-Do Musos members in the HOT Zone at The NAMM Show in Anaheim, California. Andrew is a great believer where there is a will there is a way, maybe not the usual way but a way none the less. He thinks if he can give one person or one family a little hope, his job is done.