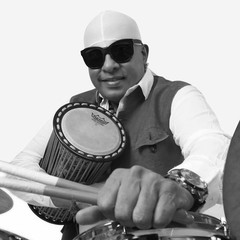 As the under current of music, the drum has always served as the lifeline of any instrumental composition it accompanies. Whether it is world music, hip-hop, R&B, or rock, drumming is the force that stirs emotion and creates magic. With that said, it is the responsibility of the drummer to produce a musical sensation that determines the direction. This is a task that world-renown percussionist Sivamani has embraced with all his might.

Born in India, Sivamani is the son of a musician, Mr. Anandan, who surprisingly enough, did not initially wish for his child to follow in his footsteps. "When I was 7 or 8 years old, my father refused to give me a drum kit," says Sivamani, "that was a big disappointment that eventually became a challenge." A challenge that Sivamani welcomed as he would go to the kitchen and make instrumental use of pots, pans and silverware. "One day my father saw me playing and realized that his son was a musician," Sivamani speaks of his father's epiphany.

Sivamani's career as a musician began to grow as he was introduced to established drummers, notably Billy Cobham and Noel Grant. "I picked up a lot from them and improved my style," offers Sivamani. As Sivamani's career flourished, he composed scores for movies in India, a popular way of getting one's music heard on a larger level. For 30 years, Sivamani was devoted to the art of adding an instrumental component ot the silver screen. All the while, he performed his solo pieces during various concerts and was well received by the people of India. As Sivamani's notoriety grew, he began doing his own concerts all over the world.

Having performed in Singapore, London, South Africa and New York, Sivamani has helped to spread the rhythm of India as well as other countries as he integrates drumming from Africa, Japan and India into his show. "People have been receptive because my music is like meditation," Sivamani says of his worldwide success. His show, which on any given day is backed by his own band Rhythm Asia or one of the bands he has jammed with, Silk - World Fusion Music, Shrida or Shankar & Ginger (Electric Double Violin), is a cathartic display of up beat pulsating rhythms. The explosive nature is unique in the way that Sivamani plays more than 100 instruments. An amazing sight to witness, this percussionist has been known to take his audience to Japan, Africa, Latin America, United States, India and back in just one sitting.

An expert in his field, Sivamani now wishes to take his music to the next level with his new album "Amma" which means Mother. "Basically I talk about life. There is an engine sound and a lot of folk inspired beats to the various songs," says Sivamani, "I also wish to work with rap artists. I want to do something different and new". A loving father of two and all round musical genius, Sivamani took things one-step further by incorporating the first cry of his daughter upon her birth into a track on this album.

Sivamani's gift for transforming everyday objects into instruments is apparent on his last album "Drums on Fire" as the prodigy put to use a plastic bucket an alternative drum. That same skill has materialized itself on this forthcoming album as the drummer continues to use unique methods of creating music.

The fact is - Sivamani is one of India's best-known and most colorful percussionists with an unmatched talent in the entertainment world. It is no wonder that he should have played with the likes of tabla player Zakir Hussain, Mandolin player U. Srinivas, Flutist Hariprasad Chaurasia, percussionist Elvin Jones and Mamathi and Ghattam musician Vikku Vinayakaram.

And those around him have flourished as well. He has worked with composer A. R. Rahman the composer of "Bombay Dreams" who's musical is now being staged by Andrew Lloyd Webber at the Apollo Theater in London and at the Broadway Theater in New York.

Having played with Steven Segal for his world music album, performed for Nelson Mandela in Cape Town when they converted the prison, Roben Island, into a museum, and accompanied Senegalese superstar Youssou N'Dour in jam and recording sessions, it will be no small feat for Sivamani to fully break into the US market.

"I just want to share my gift," Sivamani states candidly, "I want everyone to receive the power and the energy and I want to make them happy through music and peace.

And this Sivamani will do, simply by playing to the heartbeat of life . . .