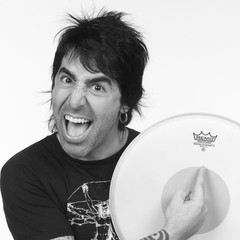 I discovered my passion for playing drums when I was five years old. I started playing to the radio with pots from my mom’s kitchen and cardboard boxes I’d get from the supermarket. One day, my kindergarten teacher saw me playing and, as a gift, gave me a red sparkle drumkit. I’ll never forget that day! It wasn’t until I was about 12 that I realized how cool it was to be in a band. My influences start with Ringo Starr because when I saw the Beatles on TV I said to myself, “That’s what I want to do for the rest of my life.” “Abbey Road” was one of the first records I played along with. I also love John Bonham and Led Zeppelin. I love how solid he played and how huge his drums sounded. Keith Moon was the first rock drummer that stood out as much as the singer or guitar player. His drumming was full of energy and he was always doing something crazy behind the kit. Stewart Copeland of The Police was another of my big influences. I started hitting the drums harder thanks to him. Terry Bozzio is just incredible. He’s in another dimension. “Heavy Metal Bebop” and his solo videos are amazing. I still listen to everything from the Beatles, Led Zeppelin, The Police, The Who, U2 and The Clash to Nirvana, Pearl Jam, Foo Fighters, Green Day, Blink 182 and Incubus. It’s important to listen to all kinds of music because it gives you a bigger picture of what’s happening in music and a better perspective on how you can fit in. I think you can always learn something from everyone. I go to shows, buy videos and keep my eyes and ears open at all times. And I try to practice as much as I can. Maná has been a big part of the Rock En Español phenomenon in the United States. We started playing in here in 1993 and we weren’t quite sure what to expect. But it took off and, when they saw how well we were doing, other bands started playing in the U.S., too. I think it’s incredible that Spanish language bands like ours can sell millions of albums and sellout arenas in the U.S. It’s also cool to see how many “anglos” are now getting hooked on our music.