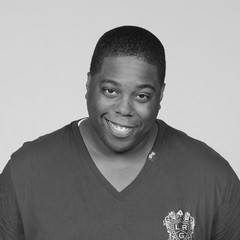 Aaron was born October 26, 1976. He was just in time for Halloween where I'm sure his wish was to be dressed as a drummer. His parents recognized his love for music very early. Their peace and quiet was willingly sacrificed to the sounds of him banging and clanging on anything he could get his baby hands on. As he grew, so did his passion for the drums and love for music. His parents raised him in a Pentecostal church in DC. That's where he got his first taste of playing with a band. He would sit on the first pew of the church closest to the drums, with his sticks in hand, feigning for his turn to play.

Aaron would finally get his turn at the age of 23, when he hooked up with a local band in DC called Gideon Band (GB). Their music is best described as a fusion of jazz, R&B and rock, serving as the foundation for lyrics spreading God's word. It was with GB that Aaron began to really express himself as a musician and gained the attention of people not only in his local area but also all over the country. It was his work with them and the great timing of one of his mentors, Gerald Heyward, which helped him to gain the audience of Usher's MD Valdez Brantley. Valdez took a liking to his playing and showed interest in working with him and helping to smooth out some of his rough spots. It was there, working with Val, that Aaron's understanding and musicality took off to incredible heights.

Joining Usher's camp has not only awarded Aaron the opportunity to play with some of the greatest musicians on the planet in the form of Juan "Natural" Najera, Arthur Strong, Valdez Brantley, but also worked with them to produce 2 tracks on Usher's multi-platinum CD "Confessions." Aaron later continued with the "Funk Rock Orchestra" (Usher's Band) as they toured all over the world for the next year and a half. He felt extremely blessed to be able to see countries and cities his parents only dreamed of. It was on this tour that Aaron began to gain some major attention and found his name in the same sentences with some of his heroes and greatest influences.