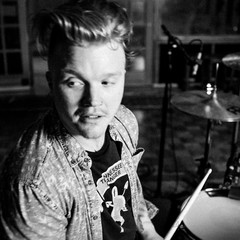 Aaron Gillespie never imagined he’d be 31 and still touring full-time as a professional musician. “I thought I’d be a worship pastor somewhere.”

In fact, that nearly became reality a little more than a year ago with Gillespie accepted a job offer at a church and prepared to move with his wife and then 2-year-old son. “We had our house packed, and we were moving,” he said.

The plan was to travel lightly, lead worship and continue making music in the vein of his first solo album, Anthem Song, which released in 2011. But, “it just wasn’t in the cards, and here we are touring full-time again.”

In the year since, he’s traveled the world with Platinum-selling band Paramore. What was initially a temporary gig remains ongoing. “I didn’t expect to have the privilege of playing with Paramore this long,” he said. “It was supposed to be a quick thing, and it just sort of evolved. So I actually made this record while on the road with the band during my downtime.”

Grace Through the Wandering, is appropriately titled for someone who’s following God’s path, unsure of where it leads.

Gillespie’s musical path began at age 14 when he co-founded Christian metalcore band Underoath then continued with the alt-rock band The Almost 13 years later. But leading worship has been a mainstay since age 15.

While co-writing a few years ago with Paul Baloche, a worship leader whom Gillespie describes as a “hero,” he had an epiphany about his role as a songwriter and worship leader. “He said it’s so important when you’re leading worship because you’re helping people with their vocabulary—with their communication—with God. I saw that as such a responsibility, a massive one.”

When he began leading worship again, his intention was to help others come to God with the faith (and vocabulary) of a child. “I just wanted people to show up and be able to express their thanks, regrets, fears, sorrow and all of that verbally to Christ without feeling condemned,” he said. “I believe that’s the way God designed it. I think we’re supposed to know Christ and make Him known, but there’s not a long list of things you have to do before that can happen.”

“Give Us Your Heart” captures that sentiment, which weaves throughout the 11 tracks. “It’s more of a song for the Church,” he said. “It’s a prayer asking that we would be given the heart of Christ for the lost, for people.”

Beyond sentiment, Gillespie’s aware it is a harsh reality. “We pray that, but then God gives us His heart, and we realize we’re going into places that we are socially uncomfortable. But that’s my prayer for me and for my family–my wife and 3-year-old child–that we will be willing to go to the dark places and do the work as opposed to staying inside of our community. Being in church is important, but I think it’s more important to go out to people and meet them where they are and meet their needs there.”

That’s the approach Gillespie took on recording his new solo album as well. He wasn’t going to wait to record when he was home and near the studio. He worked around his touring schedule and wrote and recorded the new album while on the road with Paramore.

With the help of producer Jon Howard, who tours with Paramore playing keys and providing background vocals, he recorded the album in 10 cities—from Paris to Tulsa. They carried gear and set up makeshift studios in hotel rooms. “Literally, we have one track in Bologna, Italy, one track in Paris. We did some guitars in Germany, some at home in Nashville. We kind of just had to record it all over.”

Only three tracks were recorded with his friend and producer Aaron Sprinkle in Nashville. “It’s just the most piecemeal record I’ve ever made,” he said. But Howard “kept his finger on the pulse” and helped ensure continuity throughout the record. One of the most practical recording tips came from Paramore’s guitarist Justin York, who suggested they record vocals by holding a microphone under the hotel comforter to give it similar acoustics to a vocal booth.

Gillespie and Howard laughed about the experience as they penned the liner notes to the album, intentionally leaving out their sophisticated international recording process, which included singing under the sheets. “Jon said, ‘I feel like it would be kind of presumptuous and like bragging to include the fact that we did this record in like 10 countries.’ And I was like, ‘I do too’, so we purposely didn’t put that in there. We just felt like it would be saying, ‘Yeah, man we recorded this record all over the world.’”

While the tracks may have been recorded all over (and under), the content comes squarely from Gillespie’s core. “I kind of wanted to stretch my legs and express what was inside my head and my heart.”

Honesty was just as important musically as well, even if the style didn’t fit worship music as a genre, or even his past as a rocker. “We just did exactly what we wanted,” he said. “It’s less rock and roll–definitely a departure.”

But this is one a departure Gillespie’s listeners won’t mind taking–even if it’s to path with an unknown direction. Because one thing’s for certain: there’s plenty of grace to be found in the wandering.