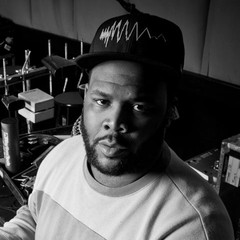 In the Beginning: Like many young musicians-to-be, Draper gained his first exposure to live music in the church and begin to play the drums at the age of nine. As Draper started to develop his skills as a drummer, he started to branch out and play for various churches around Philly. Draper recalls in those early years learning “you got to pay attention, follow the service, stay on the beat, stay in the pocket, but also play from the heart.”

As he got older, Draper received a different kind of hands-on musical education at Gratz High School. There, Draper developed some jazz chops and began to learn theory. This time proved to be a turning point for the budding musician, (still primarily a drum set player), as he consumed not only what he was hearing in the church and in school, but also the work of musicians like Vinnie Colaiuta, Dave Weckl, Giovanni Hidalgo, Pancho Sanchez, Sheila E., Tito Puente, Jaco Pastorius, Weather Report, The Yellowjackets, and fellow Philadelphians Brian Moore and John Roberts. Meanwhile, radio staples like the The Winans, Marvin Gaye, and Michael Jackson.

Mentoring: In 2001, Draper met Questlove drummer/producer for THE ROOTS. Questlove quickly took an interest in the young musician and wrote down more than a hundred names of artists that he thought Draper should listen to and study, with James Brown at the top of the list.

Questlove left a huge impression on Draper so much so Draper was dubbed “Babyquest”. He went as far as to wear the signature Questlove afro. At this point Draper was starting his transition from drum set to percussion, and began experimenting with a percussion setup in church. Questlove took note of the transition which led to an opportunity to occasionally sub for Roots percussionist Frank Knuckles, which allowed Draper to gain some exposure as he covered dates in various cities. The more he got a chance to play out and work with bands from behind his new world – a percussion rig – the more Draper honed what would become his signature and sought-after sound on his new instrument.

Big Break: Later in 2001, Jay-Z gave Draper his biggest breakto date. The rapper/producer/music exec had noted Draper’stalent at the local rap festivals in Philadelphia, and asked the 19-year-old to join him on his MTV Unplugged appearance. Draper thought ’How’d this happen?’” One listen to “Big Pimpin’” fromJay-Z Unplugged answers his question – the fluidity in Draper’splaying is so undeniable, the cowbell and woodblock pattern soin the pocket, that you forget that you are involuntarily bobbing your head, even as Jay-Z starts chiming in with acall-to-action: “Bounce! Bounce! Bounce!” On his cut and others from the broadcast, Draperfocus is now like a seasoned player on the heartof each song, and providing that steady flow of rhythm that keeps circling back to the heart.

Everything Draper does on this track, and on the majority of the Unplugged session, revolvesaround this approach – the product of a bornlistener.

In 2005, Draper would get his second major break when he started touring with powerful soul songstress Jill Scott.Throughout the years Draper has shared the stage with other accomplished artists. Draper’s resume is brimming with high-profile gigs such as: Common; Karen Clark-Shears; LL Cool J; Eminen and Dr. Dre. Yet the percussionist remains wide-eyed and humble about his success,the exposure, and traveling the world.

In the Lab: Draper’s skills extend beyond the stage. He has proven himself as a valuable asset in the studio and has recorded with Neo-Soul artists: Jill Scott; Musiq Soul Child; and Bilal. Draper made his debut in 2011 as a producer on Jill Scott’s “Light of the Sun” album with the song entitled “I Love You”.

In Style: However, he also knows that he has something special that keeps his phone ringing. Through trial and error, going back to his church band days, through listening sessions with Questlove and his earliestgigs in Philly, Draper developed a sound that works pointedly for this particular brand of music. Andoriginality and self-awareness are hot commodities when you’re a professional.

Draper’s style, ability and energy aren’t only notice by A-list artists, but by the music industry at large. In2011 Draper was awarded “PERFORMER OF THE YEAR” by Drum Magazine.

To Sum It All Up. So the kid from 22nd Street in North Philadelphia and the hometown church bands hasquickly become a seasoned pro, holding down the beat with flavor and originality for some of the biggestnames in gospel, hip-hop and R&B. “When I’m called to do a gig, I bring heart and passion, so I give my all” Draper explains.