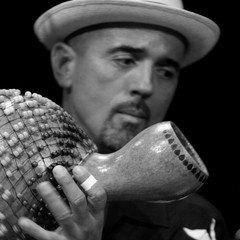 John is widely respected as one of the top writers, teachers and historians in the field and was a member of the Latin Jazz Advisory Committee of the Smithsonian Institution. He is currently part of the faculty at the Jazz School Institute (Berkeley, CA) and the College of San Mateo (CA). He has conducted countless workshops, lectures and clinics in the US, Latin America and Europe since 1972 at institutions of all types including the Adventures in Music program of the San Francisco Symphony, the Berklee School of Music in Boston, UCLA, Yale, Stanford, the University of Wisconsin at Madison, the University of Michigan, Cal State Monterey Bay, Cal State Hayward, the University of Colorado, Yakima Valley Community College, the Afro-Cuban Drumming and Dance Program at Humboldt State University (CA), Cal State Sonoma, Cal State Sacramento, Cal State San Jose, Tulane University of Louisiana, Jazz Camp West, the San Francisco Conservatory of Music, the Los Angeles Music Academy, the Museum of the African Diaspora (San Francisco), he Lafayette Summer Music Program (CA), and La Universidad Inter-Americana in San Germán Puerto Rico. He has contributed to the international magazines Percussive Notes, Modern Drummer, Modern Percussionist, and Latin Percussionist. The San Francisco Bay Area community in which he still lives and works has presented him with numerous awards and honors for artistic excellence and social dedication.

John was the director of the Orquesta Tipica Cienfuegos (l976-1980) and the award-winning Orquesta Batachanga (1981-1985). He was founder and director of the internationally renowned, Grammy-nominated Machete Ensemble (1985-2006), who released nine CDs with special guests from Puerto Rico, Cuba, NY, Los Angeles, and San Francisco, mostly on John’s Machete Records label. He currently directs the John Santos Sextet, Latin jazz ensemble. Their second CD, Perspectiva Fragmentada, released in October 2008, was nominated by the Jazz Journalists Association (NY), and by Cubadisco (Cuban Grammys) as one of the top Latin Jazz releases of the year, and selected as one of the five top Latin Jazz CDs of 2008 by New York’s All About Jazz magazine, among many honors. John’s Afro-Caribbean Folklóric Ensemble, El Coro Folklórico Kindembo, has produced three full length CDs since 1994, two of which were Grammy-nominated including the most recent, La Guerra No, in 2009.