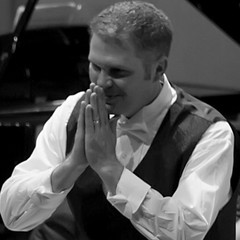 I have the greatest job in the world. I work with the best students on the planet in one of the most amazing and high-ranking educational and performance environments anywhere. I love what I do, and have been very lucky to perform all over Europe, the Far East, and the United States (venues include Carnegie Hall, Tokyo Opera City, the National Concert Hall of Taipei, and Mahidol Performing Arts Center), University Concert Halls, and National/Regional Music Education and Trade Conventions across the country.

I've been recorded on fifteen CDs, including the Eastman Wind Ensemble at 50 recorded live on the 2000 tour of Japan and Taiwan (Warner Brothers), and Dusk: Percussion Music from the Heartland (Zgwonth), and engineered projects for Col Legno Records, Naxos, Calabaza, Equilibrium, Flying Horse, and Garnet House Productions. These include three critically-acclaimed discs featuring the international award-winning Florida State University Percussion Ensemble and twelve other discs for a variety of artists. You can check out the Garnet Houselink and website for a complete catalog. In 2014 I was admitted to the National Academy of Recording Arts and Sciences as a voting member for the Grammy Awards.

During the school year I teach at Florida State and perform as a utility percussionist with the Naples Philharmonic and The Florida Orchestra, and for several years I served on the faculty at the Eastern Music Festival in Greensboro, North Carolina. During the summer I work full-time for Garnet House.

I hold degrees from some of the best music schools in the world--The Eastman School of Music (Doctor of Musical Arts in Percussion Performance and Literature), Northwestern University (two Master's degrees, one each in Percussion Performance and Jazz Pedagogy) and Furman University (Bachelor of Music Education). My teaching career began at Samford University (1995-1998), then to The University of Kansas (2000-2003), and then to Florida State from Fall of 2003 to the present.

Amazing family--my beautiful wife Eva is from Denmark and directs the theatre program at Tallahassee Community College, as well as Assistant Coach of the national award-winning TCC Forensics Team, two incredible sons (Gabriel and Tristan), and one cat (Halle, for Halle Berry in Catwoman, possibly the worst film ever aside from Gigli).